When I was in third grade, I had no idea that I couldn’t see very well. I was able to do my work at school, play with my friends, do the things I wanted to do at home, and I don’t think it even occurred to me that something might be wrong with my vision. I’m not sure what brought it about, but my mom made me an appointment with the eye doctor. I went to the eye doctor’s office, sat down in his strange, leather-upholstered chair, and the doctor brought down the apparatus with all the lenses that tests your vision in each eye.

I thought it was funny as he would slide one lens in and another lens out. “Which one is better, the first or the second?” he would ask. After going through this routine several times, he informed me that I needed glasses. I thought that was silly. My eyes weren’t bad. I could do everything I needed to do. But we picked some frames, and he told us he would call when my new glasses came in.

When the glasses came in, my mom brought me back to the eye doctor so that the glasses could be adjusted to my face. A little bend here, a little adjustment there, and soon I had my first pair of glasses – with large red frames. Can you tell I’m a 1980s child? I will never forget what happened when I walked out of that office with my first pair of glasses on. I opened the door, stepped out into the bright sunshine and looked up at the leaves on the trees. I gasped. “Mom! I had no idea that you could see each individual leaf on the trees from way down here!”

Evidently my eyesight had been worse than either of us thought. It wasn’t until someone else told me I needed glasses that I realized something wasn’t right, and it wasn’t until I was able to see clearly that I knew there were things I hadn’t been able to see before.

In the third chapter of John’s first epistle, John writes, “See what love the Father has given us, that we should be called children of God; and that is what we are.” In the eyes of God, we are not our jobs, we are not our friends, we are not the things we are good at or terrible at. We are God’s children. God is able to look beyond the exteriors and facades we put on, and God sees our truest identities – our identities as God’s children.

The problem is, we don’t always see that in ourselves. Too often we can get caught up in what others see in us. Am I doing the right things? Wearing the right clothes? Behaving in the right way? And, if the people around us are all worrying about the same things we are, we may not even know that what we’re focused on isn’t what ultimately matters. It isn’t until we have a radical encounter with God that we realize who we are.

After the resurrection of Jesus, two people were walking on the road to Emmaus and discussing what had happened to Jesus – that he had been crucified, and that they had hoped he was the one who would redeem Israel. Jesus appeared to them and was walking with them, but they didn’t know who he was. They told him about Jesus, his death and that their hopes had been crushed, and that some women were claiming that some angels had told them that Jesus was alive. Others had gone to investigate and had not found Jesus there. Jesus explained everything to them, beginning with Moses and all that the prophets had said, but it was not until later when he broke bread with them that they saw him and understood who he was.

Later on, Jesus appears among the people, and they think he is a ghost. He shows them his hands and feet, and he eats with them so that they can be assured that he is real. When he does these things, they realize who he is and that he has been raised from the dead. This is the part we often focus on. We look at the bodily resurrection, and we look at what Jesus does that causes the disciples to know who he is. But, as I was studying our Scripture passage for this morning, suddenly I thought about these post-resurrection encounters in a new way. Yes, the disciples see Jesus for who he is, but Jesus also tells them who they are.

In Luke 24:45-48, we read: “Then he opened their minds to understand the scriptures, and he said to them, ‘Thus it is written, that the Messiah is to suffer and to rise from the dead on the third day, and that repentance and forgiveness of sins is to be proclaimed in his name to all nations, beginning from Jerusalem. You are witnesses of these things.‘”

In the presence of the risen Christ, in a shared meal, and in witnessing the scars of the crucifixion, the disciples come face to face with the Son of God. They see him. They recognize him, and they know him. Once they know him, they hear his words in a brand new way. In his presence, they find out who they are. In knowing him, he tells them who they are to be. 1 John 3:2 says, “Beloved, we are God’s children now; what we will be has not been revealed. What we do know is this: when he is revealed, we will be like him, for we will see him as he is.”

We are God’s children here and now, but John says we don’t know yet what we will be. It hasn’t been revealed yet. And, I don’t think he means that we have no idea what we will be, but rather that because we will become like God when we “see him as he is,” that what we will be is so amazing that our human words can’t describe it. When God is revelaed to us, we will be like God. We will be transformed into the likeness of God, and the truth of who we are as God’s children will be made clear.

I love the way that John Wesley understands this verse. In his Notes on the Bible he writes:

But we know, in general, that when he, the Son of God, shall appear, we shall be like him – The glory of God penetrating our inmost substance. For we shall see him as he is – Manifestly, without a veil. And that sight will transform us into the same likeness.1

When we are in God’s presence – when we see him as he is – we will be transformed.

Perhaps this is why Paul wrote in the book of Romans, “I appeal to you therefore, brothers and sisters, by the mercies of God, to present your bodies as a living sacrifice, holy and acceptable to God, which is your spiritual worship. Do not be conformed to this world, but be transformed by the renewing of your minds” (Romans 12:1-2a).

In worship, we encounter God, and that encounter changes us. It conforms us into the likeness of God, albeit it in an imperfect and limited way. On the day when God is fully revealed to us, and we see God as God is, we will become like him in earnest, and what that will be is far more amazing that we can even begin to describe.

As a child, one of the things that drove me most crazy was hearing my mom or my dad say, “Just wait until you have children of your own.”As children, sometimes we want nothing more than to grow up, to be in charge, and to do things in the way that we think is best. We resent that we aren’t in charge, and in our childhood wisdom, we are certain we could do things better our own way. A funny thing happens, though, as we grow up. As we encounter many of the same pressures and responsibilities our parents faced, we find that our perspective changes. I love the way I’ve heard it said when someone had this realization. She said, “I don’t know how it happened, but I opened my mouth and my mother came out.”

Our experiences shape us, even when we think they don’t. They change us into the kind of people we become. And, when we finally see God, as it says in 2 Corinthians, “with unveiled faces, seeing the glory of the Lord as though reflected in a mirror,” we will be “transformed into the same image from one degree of glory to another; for this comes from the Lord, the Spirit” (2 Corinthians 3:18).

In all the verses that follow, John talks about sin and the Christian life. He even goes as far as saying that “no one who abides in [Christ] sins; no one who sins has either seen him or known him.” And maybe that makes you quake in your boots a little. Does he really mean that if we sin we are not Christians? Taken by itself, this verse seems to suggest that, but I think what John is pointing to is the tension of the Christian life.

Right now we are children of God. Right now we belong to God through Jesus Christ. Right now we are justified, saved by grace, forgiven. At the same time, we are not fully pure. We are not righteous all of the time. We make mistakes more times than we can count. But when we finally see God, when God is revealed to us, “we will be like him, for we will see him as he is.” On the day when our lives are fully and perfectly found in Christ, there will be no more sin, no more suffering, no more darkness, no more pain. We experience glimmers of that now, but it is far from perfect.

When we experience God, we are transformed.

We learn who we really are in the presence of God.

And as we are transformed, we become more like him until the day when we finally see, when God is finally revealed. But until that day, we live with verse 3: “And all who have this hope in him purify themselves, just as he is pure.” In this in-between, in this time where we are already children of God but not yet completely who we are, we cling to hope. When we fall down, we look to Jesus for direction. When we struggle, we call out to Christ. Even in the midst of hopelessness, our hope is in Jesus, and it is because of Jesus that we are being transformed and united to God. It is because of Jesus that we are being reconciled. And in him, we find our hope.

Maya Angelou wrote a poem that illustrates this so beautifully:

When I say… “I’m a Christian”
I don’t speak with pride.
I’m confessing that I stumble
And need Christ to be my guide.

When I say… “I’m a Christian”
I’m not holier than thou,
I’m just a simple sinner
Who received God’s good grace, somehow.

Even as we stumble and fall, may Christ be our guide. Even when we’re lost, may Christ find us and forgive. Even though we’re sinners, may we be reminded daily of the gift of God’s amazing grace. And may we always look to Jesus, our Hope, as we await the day when we can finally see.

1From John Wesley’s Notes on the Bible, 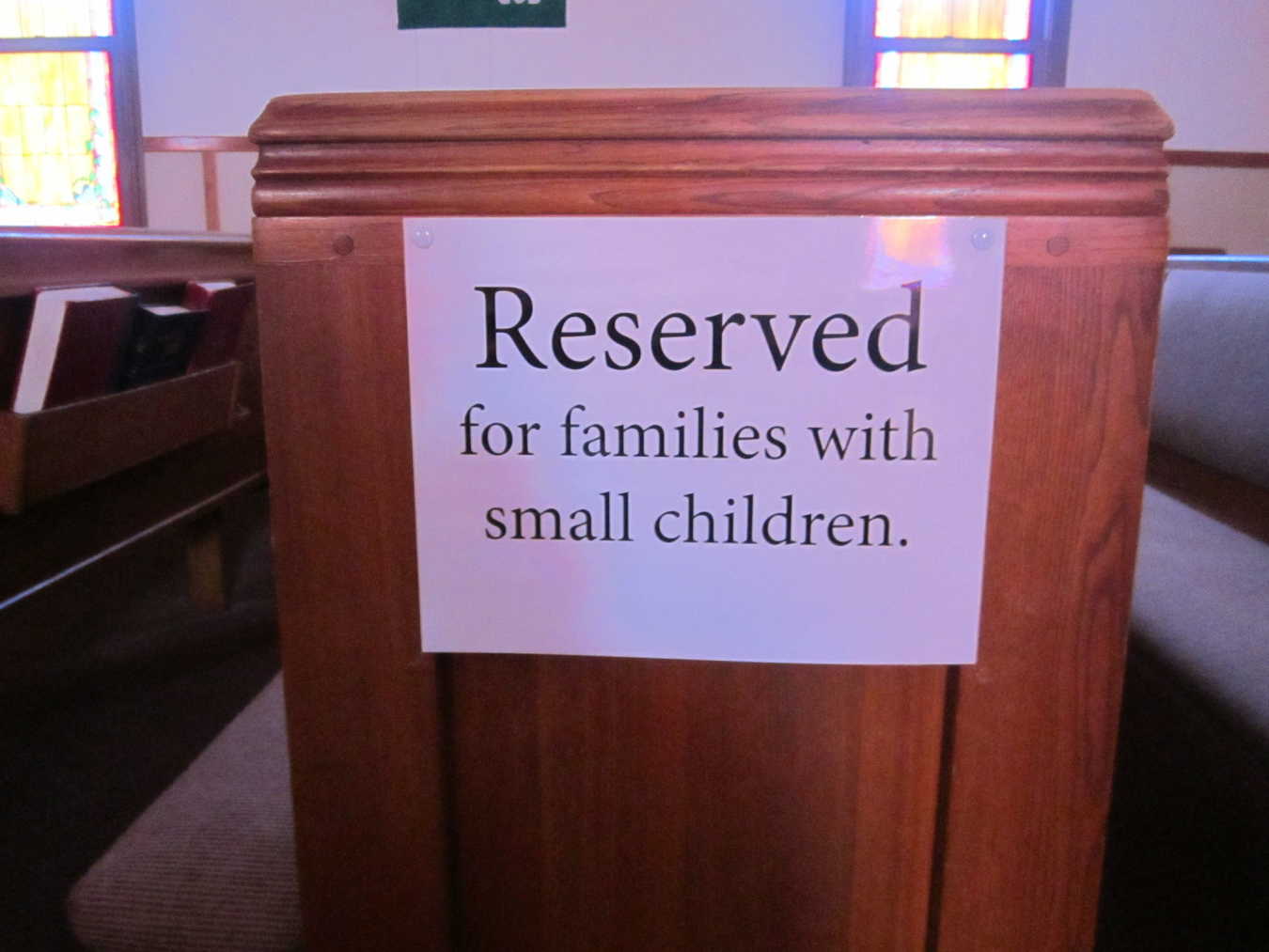 Is Teaching Kids about Faith Indoctrination?

Is Teaching Kids about Faith Indoctrination?