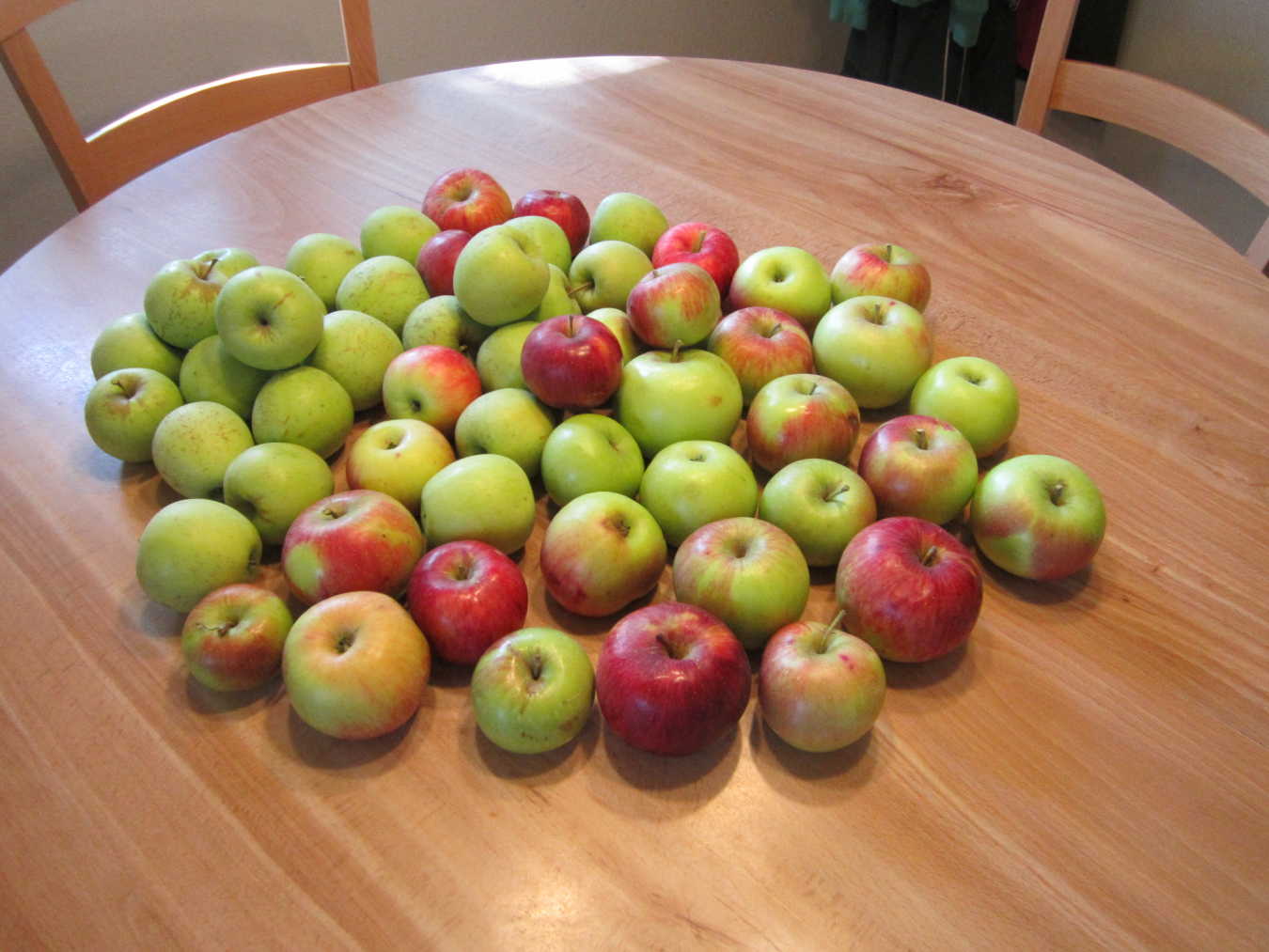 Canning has taught me a lot about church conflict. That sounds strange to say, but it really has. If you’ve ever done some canning, you probably know what the sound of jars clanking together sounds like. Whether you’re sterlizing the jars, or placing them in a hot water bath, some of the jars will clank together. It almost sounds like wind chimes playing in your dishwasher, or like a child playing a toy xylophone. The clanking isn’t a bad thing, and it almost never results in the jars breaking. They are strong. They are meant to withstand the heat, the jostling, the cooling, and the pressure.

And going through that canning process makes the jars capable of preserving what’s inside for a long time to come. And the contents are a treasure – as many of you know. When kids or grandkids or friends come home and have the opportunity to take with them some of those jars – you can see what a treasure those jars contain. The process, the work, the pressure creates something beautiful that wouldn’t have been possible otherwise. And we look forward to the results every year.

What if I told you that the same was true for conflict in the church and in our own lives? What if I told you that the results were something to celebrate, rather than something to try our hardest to avoid? We read about conflict, and about bringing our concerns face-to-face to the person who has offended us, and it makes us nervous. It makes us uncomfortable. Conflict is hard and messy, and sometimes it doesn’t turn out the way we wanted it to. Conflict turns up the heat, cranks up the pressure, and puts us in a situation we probably never wanted to be in in the first place.

Again, truly I tell you, if two of you agree on earth about anything you ask, it will be done for you by my Father in heaven. For where two or three are gathered in my name, I am there among them.

If we agree, God will do it. Where even a couple of people are gathered together, God will be among them. And I’ve heard people use these two verses to make a couple of claims. I’ve heard some use these verses to suggest that conflict is terrible, that conflict is sinful, and that the goal for church boards and councils and Bible studies is for everyone to agree with each other. I’ve also heard these verses used to make people feel better when only a handful of people show up to a prayer meeting, or when the sanctuary is fairly empty on a Sunday morning. Taken in context, and with a look at the original Greek text, these verses mean something very different – something that should give us all kinds of hope.

Our trouble comes from two places – not considering the context, and a misunderstanding of what it means to agree. Whenever conflict strikes in the church, we are quick to remind each other: “Matthew 18!” as though the verses give us a divine mandate for how to proceed. As though if we follow these steps exactly, we are guaranteed to get the result we were hoping for, or as an assurance that God is on our side. But, if we back up and read this passage in light of what comes directly before and after it, we get an entirely different picture.

What do you think? If a shepherd has a hundred sheep, and one of them has gone astray, does he not leave the ninety-nine on the mountains and go in search of the one that went astray? And if he finds it, truly I tell you, he rejoices over it more than over the ninety-nine that never went astray. So it is not the will of your Father in heaven that one of these little ones should be lost.

Before addressing what conflict within the body looks like, Jesus tells a parable of a compassionate shepherd who goes in search of the lost sheep. He leaves behind the other 99 to reclaim the 1. We begin with a picture of compassion, the hope that none will be lost, the desire that all will be part of the fold.

And then our passage follows with how to proceed when someone sins against us. The goal is pursuing the one who has offended in order to reclaim that one – not to prove that we are right, not to make our case, not to feel holy or accomplished or justified. The goal is to welcome back the one. Immediately following our passage for this morning, Jesus tells a parable about a king who forgave the very large debt of his slave. But the slave, who was owed a little bit of money from a fellow slave, did not forgive the small debt. From these two parables, we can see that forgiveness is a central part of our Christian lives.

Because sin exists in our world we will both need to forgive others as well as be forgiven of our own sins. Radical forgiveness was shown to us by God in the ultimate gift of Jesus, and this is the way we are to live – to forgive even when it seems foolish to forgive (not that we should put ourselves in physical danger or ignore real and harmful issues), but that we don’t harbor resentments or keep track of wrongs done to us because we know how much we have been forgiven.

When we take this passage in its context, perhaps what we see here is more than a step-by-step instruction on how to rebuke someone who has offended us. We see hope for reconciliation. We see how far God was willing to go for us so that we will be propelled to extend the same kind of radical and self-giving love and forgiveness to others. We see that God desires for no one to be lost. But what does it mean to agree? Does that mean we should never disagree? Does that mean we should always have the same thoughts as everyone else?

I’ve heard committees pride themselves on “being of the same mind” – or never disagreeing. Is that what Jesus really means here? When Jesus says, “If two of you agree on earth about anything you ask, it will be done for you by my Father in heaven,” does he really mean that if a small group of people make up their mind about something it will automatically have to happen the way they wanted it to? Some would say yes…and there have been entire movies made around the idea of strong-arming God into doing what we want by agreeing about something. Is that really what Jesus means?

This week, I thought a lot about that word “agree.” And as I wondered about it, I went to the Greek. What I found there was very surprising to me, and it has changed the way I read this passage. The word for agree is sumphōnēsōsin, which is from the same root word as our word “symphony.” The word literally means, “to sound together.” In a symphony, a collection of musicians play different instruments to make one, united song. “Truly I tell you, if two of you agree on earth about anything…” Agree – “to sound together.”

As I dug into the possible meanings for this word and the way it had been used in historical writings throughout the ancient Greek world, I came across a possible definition for the word as it is used in the writings of the Shepherd of Hermas. Now, the Shepherd of Hermas did not live at exact time Jesus lived. His writings come from the 3rd century, the 200s, but in his work “The Mandates” he uses this same word, and it was a common enough usage of the word that A Greek-English Lexicon of the New Testament and Other Early Christian Literature includes his usage as a possible translation for the word. In the Mandates, the Shepherd of Hermas wrote:

For the empty vessel placed together with the empty is not broken, but they agree one with the other.

When the two vessels are placed together, they do not break. But they agree. A more literal translation would say, “The empty is not broken, but they resound or harmonize one with the other.”

In a symphony, there are many instruments. I played the clarinet as part of a symphony orchestra. As a higher-pitched woodwind, I usually found myself playing a melody or an accent to the melody. Occasionally, one clarinet would have a solo. The deeper strings – the bass and the cello had different roles. The percussion sometimes played a beat, and other times added to the array of sounds that were all part of the same song. Even though each section of the orchestra had a different role, we were all playing the same song. We were all moving in tempo because we had our eyes on the same conductor. Our notes were not all the same, but they all agreed. They all added to the harmony. They were all important and necessary and beautiful because they were part of the song.

Perhaps, Jesus’ words about agreeing with one another aren’t as much about thinking the same things all of the time as much as it is about what happens when we disagree. Conflict is unavoidable. When you get a big group of people together – even a smaller group, like a household! – there won’t always be total agreement in the small things, sometimes not even on the bigger things. When we clash together, how do we respond to each other? Are we listening? Are we keeping our eyes on Jesus and trying to move in step with his lead? Or are we trying to break each other?

We will have conflict. And sometimes it is difficult and messy. But I truly believe that as we navigate those difficult waters, we will end up with a more solid, more beautiful kind of agreement than mere going along with what everyone else is doing. Because, as C.S. Lewis once wrote, God “works on us through each other.” When we go through the process of conflict where we are desiring that no one get lost in the process, where we are keeping our eyes on Jesus as our lead, and where we listen to each other with the hopes of understanding, we will sing together in harmony that is much more beautiful than anything we could have done on our own. May God guide and direct us as we seek to be faithful.