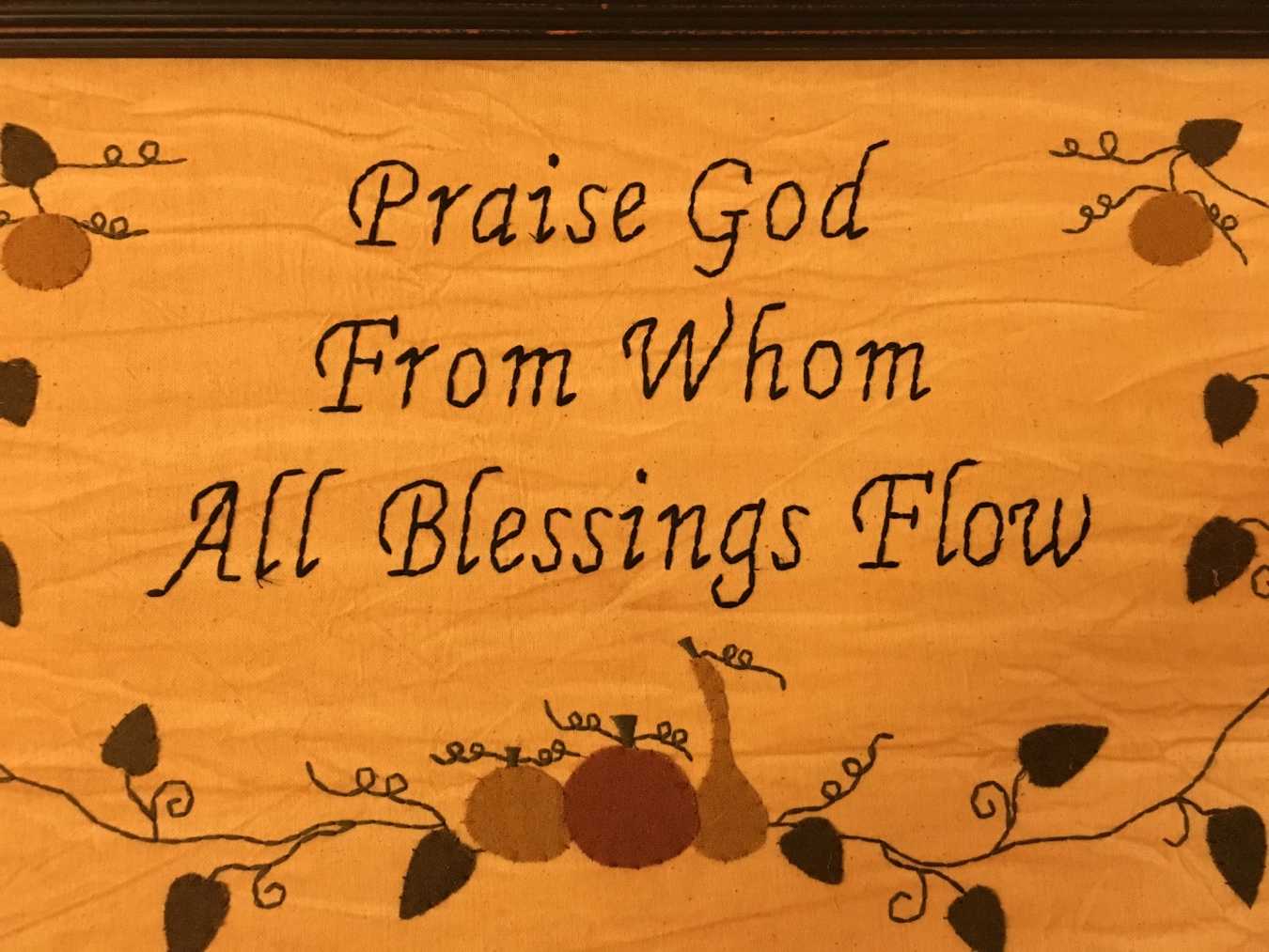 If Gratitude Is a Song

By April FietNovember 22, 2015No Comments

What do you do when you have a near miss? Have you been there, in that moment where you expect something terrible, but make it through instead?

This past week, as my family left the church after choir practice, we got into a car accident. We were unhurt, and though the car was seriously damaged, it is replaceable. As Jeff talked with the helpful police officer, I took our kids across the street so that we could find warmth and comfort for them in one of the businesses that was still open. I got my kids a place to sit by the fireplace in the lobby, and the people who were working were kind and hospitable. Suddenly, the realization of what had happened washed over me, and I almost broke into tears. I was shaking, and then I was overwhelmed with gratitude.

It was almost like there was a bubbling spring inside of me – as contagious as a baby’s belly laughs. The joy and gratitude seemed to surround me on all sides. I didn’t say anything or do anything, apart from sitting with my kids, but it was like gratitude was a person sitting with us and wrapping us all up in her arms.

The people of Israel had suffered in Egypt under Pharaoh’s rule. They slaved and strained under harsh conditions, and after plagues and conflict, Pharaoh finally allowed the people to leave. And then, with a change of heart, Pharaoh sent his army after the people of Israel. The army of Pharaoh caught up with the people, and they were trapped – the mighty sea in front of them, and the advancing army behind them. They cried out to Moses, “Was it because there were no graves in Egypt that you have taken us away to die in the wilderness?” Behind them was death, and ahead of them was death. They were terrified, stuck, and they could not see a way through.

But, when disaster seemed inevitable, God made a way. According to the word of the Lord, Moses lifted his arms and the staff, and the sea parted, which allowed the people to pass safely through. After they had all made it through the sea, the sea closed back up, and the people knew they had escaped disaster.

And how did they respond?

Moses burst forth in a song of praise and thanksgiving:

There is something about those moments in life when you feel like you are up against the wall, and then something amazing happens, that has a way of filling us with so much gratitude that it overflows. We can’t keep it in, and it comes forth from us in ways we never could have anticipated.

When God shows up in a mighty way, we can’t help but sing.

If gratitude is a song, what are you singing about today?

When the seemingly impossible things in life are overcome by the miraculous, we can’t help singing songs of praise. And those songs are contagious. Moses sings, and then Miriam picks up the song and sings it too. She takes up her tambourine, and she sings. All the women pick up their tambourines and join her in song and dance. Gratitude – like singing – is catching. Moses’s song of praise becomes Miriam’s song of praise, and soon it is the song of all the people.

The trouble comes in when we’re just far enough on the other side of the miraculous that we’ve fallen back into normalcy, or maybe we’ve even fallen on difficult times. The people of Israel sang with Moses and Miriam on the shore of the Red Sea. They had been spared, and they were thankful. But, it wasn’t much longer after that that their songs of praise turned to grumbles and complaints. In fact, only one verse after the ending of Miriam’s song, the people were faced with thirst. There was no water, and by verse 24 the people had completely lost their songs of praise and turned to bitter complaint.

Joy and gratitude are difficult to hang onto. They sneak up on us at the most unexpected times, and we lose hold of them just as easily. Gratitude and complaint are like two opposing teams playing tug-of-war. It’s easy to be pulled toward gratitude when the miraculous is happening, and just as easy to be pulled toward complaint when the miraculous is just far enough in the rearview.

Even though sometimes gratitude overwhelms us and takes us by surprise, I am convinced that gratitude is most often a choice, and a radical one at that. It is a practice that can be honed, a discipline that can be worked at. It’s a process, to be sure. And we won’t always get it right. But, the more we sing songs of praise, and the more we listen to the joys and grateful songs of others, the more we will form the habit of living grateful lives.

When the people of Israel began to complain in the wilderness, what was one of their go-to refrains? “We had it so much better in Egypt!” In their complaint, they resorted to comparison, to envy, to resentment. Even though it wasn’t true at all, they convinced themselves that Moses had taken them away from a much better life. They resented him for it, and they couldn’t help but compare their lack in the desert with some imaginary plenty in Egypt.

Henri Nouwen wisely noted that the opposite of gratitude is resentment, which always looks like envy. Does that ring true for you like it does for me? If only we were back in Egypt. If only I had an easy life like someone else. If only I had more of what I wanted. And we feel resentful, and envious. When we are cultivating resentful soil, gratitude cannot grow.

Resentment and gratitude cannot co-exist, since resentment blocks the perception and experience of life as a gift. My resentment tells me that I don’t receive what I deserve. It always manifests itself in envy.

Gratitude goes beyond the ‘mine’ and ‘thine’ and claims the truth that all of life is a pure gift. In the past I always thought of gratitude as a spontaneous response to the   awareness of gifts received, but now I realize that gratitude can also be lived as a discipline. The discipline of gratitude is the explicit effort to acknowledge that all I am and have is given to me as a gift of love, a gift to be celebrated with joy.[1]

When the miraculous is right in front of us, gratitude comes easily. When we are surrounded by joyful songs, we can be drawn in and compelled to sing along. But when life seems too mundane, or too trying, or too inaccessible to us, how quickly our songs can turn to resentment or complaint.

Perhaps this is one reason among many why having a day set aside for thanksgiving is so important. We might feel awkward as we sit around the table and try to think about what we’re thankful for. We might be tempted to rush to the answers we give every year, without really paying them much thought. But, the act of choosing gratitude during the normal, mundane, or difficult seasons of life is an act of defiance, and an act of radical trust that someday all will be made new. As Jayson D. Bradley wrote, “Thankfulness is more than a quaint and sentimental expression, it’s a thrown gauntlet, a challenge to the status quo. It’s a brazen communication at the existence and experience that says, ‘I see the reality beyond you.'”[2]

Or, as the beautifully defiant commendation in Burial Rite I in the Book of Common Prayer says, “All we go down to the dust; yet even at the grave we make our song: Alleluia, alleluia, alleluia.”[3]

Whether we have just passed through the Red Sea, or have found ourselves at the bitter waters of Marah, we can defiantly choose gratitude. We can remind ourselves about our experiences of passing through the seas of life, just like the people of Israel had the custom of doing. It’s no wonder why over and over through the Old Testament, God reminds the people that God was faithful to bring them up out of the land of Egypt. It’s as though God were compelling them, urging them to remember, to keep the miraculous ever before them, even when it seemed impossible to do.

If gratitude is a song, what are you singing about today?