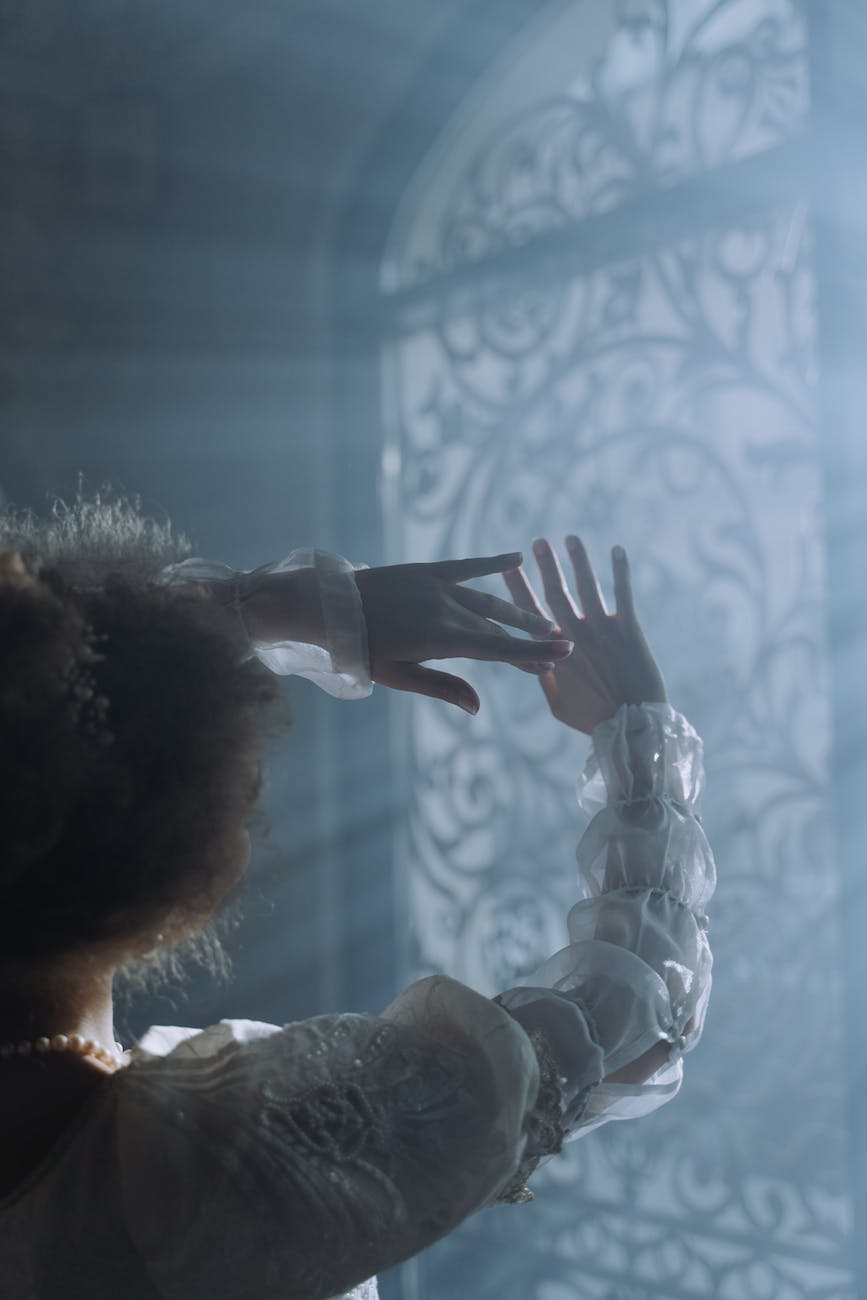 This year, as Thanksgiving approached, my kids tested positive for Covid. A few days later, my husband was sick, and then it was clear I was getting sick, too. I prepared my sermon for the first Sunday of Advent knowing it was unlikely I would be about to give it. We are doing a sermon series this year focusing on the women of Advent, and I thought it would be a new way to enter into the stories of these biblical women by telling them in a new way.

I wrote this to be given by a reader and by someone taking the part of Mary. As I observed this being done via our livestream this morning, I was moved to consider anew what it is like to be seen by God, and how God is calling us to walk in hope’s impossible light.

Reader:    We enter this Advent season, just on the heels of Thanksgiving, with a Scripture reading so familiar at Christmas time that we might be able to recite it right along with whomever is reading it, or at least summarize the high points. The angel Gabriel shares unbelievable news with Mary. She ponders all of it in her heart, and she responds with obedience we cannot even fathom: “Here am I, the servant of the Lord; let it be with me according to your word.”

She offered her whole self, when it could have cost her everything. She could’ve had her engagement broken. She could’ve been shunned by the community for being a pregnant and unwed mother. She faced physical danger in addition to the social risk of being an expectant  teenager. The maternal mortality rate was startlingly high–much higher than the rates we face today. And, even if the mother survived, the rate of infant mortality was incredibly high as well. What Mary was asked to do was terrifying, but her response to God invites us to join her in walking in hope’s impossible light.

Imagine with me that Mary is here with us today. She approaches the microphone with fear and trembling, and she tells us her story. Let’s listen to what she has to say to us with fresh ears, and let us ask the Holy Spirit to help us make room for hope this Advent season.

Have you ever felt like no one noticed you? Like you are standing in a crowded room, and no one can see you are there? Or, maybe like you go about your everyday life–going to the market, going to worship, taking care of things at home–and nothing makes your life any different from anyone else’s? It’s not that I didn’t like my life. It’s just that it wasn’t anything special. It was ordinary, and when things are ordinary, they can sometimes feel invisible or hidden from the rest of the world.

I was engaged to a kind and righteous man named Joseph. I could not have asked for better. He was a carpenter–a lucrative profession–and he always tried to do what was right in God’s eyes. If you are someone who is the same way, you know how difficult that can be. Doing the right thing is quite often not the easy thing. It can have consequences, and it can make things difficult when what God wants is something that pushes up against what other people are expecting of you.

When Gabriel appeared to me, I was troubled. Everything was stirred up inside of me. He called me “favored one.” Who me? What could I have possibly done to earn God’s favor? Nothing that the other young Jewish women of my time weren’t also doing. Gabriel must have seen my troubled heart, and so he repeated to me: “Do not be afraid, Mary, for you have found favor with God.” Favor. With God. God had seen me–ordinary me–and noticed me. God regarded me. God found favor with me.

What the angel said next was equal parts terrifying, confusing, and wonderful: “And now, you will conceive in your womb and bear a son, and you will name him Jesus.”

Jesus. That name means “He saves.” Could it be? Could our wait for the Messiah finally be over? Is it possible that just as God noticed ordinary me, God had remembered the promises to his people from so long ago?

Gabriel continued, “He will be great, and will be called the Son of the Most High, and the Lord God will give to him the throne of his ancestor David.” My mind and heart raced. I remembered the words of the prophet Jeremiah, as if in a flash of epiphany: “The days are surely coming, says the Lord, when I will raise up for David a righteous Branch, and he shall reign as king and deal wisely and shall execute justice and righteousness in the land.”

We desperately needed God’s righteousness to reign. Oh, how we needed someone to be a wise king, one who cared about justice and following in God’s ways. As it was, we were under the thumb of Rome. In some ways, Roman rule was kinder than the rule the people of Israel had suffered under before. Rome at least let us worship our God. But, there were other things. Terrible things. They delighted in making a public spectacle of anyone who was seen as a threat. They crucified people–the most gruesome, shameful way for a person to die. And their Emperor? He believed he was God…or at least the son of God. Can you even imagine?

The angel said to me, “He will reign over the house of Jacob forever, and of his kingdom there will be no end.” A neverending kingdom of righteousness and peace. The line of David re-established. An end to our struggle. Noticed by God.

And then I remembered. Gabriel was saying these things to me. He was telling me I was the one God has chosen to give birth to the one my people had been waiting for for so many generations. Me.

Everything flashed before my eyes in an instant: the disapproving looks from people who did not understand, Joseph’s broken heart when he thinks I have been unfaithful, the shame my parents would carry as they received judging glances from others. Would I be able to carry not only this child, but also the weight of what others would think?

Would I be able to nurture the one God was sending to set God’s people free?

Would I be able to do this impossible thing God asked of me?

Before I could stop myself, I asked the angel, “But, how?” He reassured me. He promised God would be with me and wouldn’t expect me to do this alone. And then he told me something even more unbelievable than everything else: Elizabeth, my relative, was expecting a child in her old age! Elizabeth had longed for a child. She had prayed and waited and fasted. She and her husband were such faithful people. Her husband was even a priest! And yet, they never had a child, and Elizabeth was so old that any hopes of having a child were dashed. She was in her sixth month?!

If God remembered Elizabeth and was taking care of her, surely God would remember and take care of me. Gabriel said these words, and they went straight to my heart: “ For nothing will be impossible with God.”

I was still terrified. I didn’t know if I was strong enough. I didn’t know how I would handle what God was asking of me, but I found myself saying without hesitation, “Here am I, the servant of the Lord; let it be with me according to your word.”

Let it be with me.

There is nothing more beautiful than being noticed and remembered. God had seen me. And I said, “Yes.”

Reader:    This morning we are beginning an Advent sermon series we are calling “Magnificat.” The “Magnificat” is the song of praise Mary sings when she learns she will be the mother of Jesus: “My soul magnifies the Lord, and my spirit rejoices in God my Savior, for he has looked with favor on the lowliness of his servant.”

Through this series we will explore the journey toward Christmas from the perspective of the women in the story: Mary, Elizabeth, and Anna. We will allow ourselves to feel their worry and their wonder, their sorrow and their joy, because God was present with them as they participated in the story of the coming Christ child, and God is present with us now–no matter what we are going through.

The first week of Advent is the week of hope. We light the hope candle, and that candle will burn through the whole season of Advent. The hope candle burns the longest, and hope sustains us as we wait. Today, in the story of Mary learning she would become the mother of Jesus and learning that Elizabeth would also have a son, we heard the profound statement from the angel that nothing will be impossible with God.

Friends, we need this word today, too. We see the divisions in our world, the news reports of unspeakable violence every day, the constant refrain of illness and grief and loss, and we wonder if it is possible for things to be made whole again. It feels impossible. It is impossible. We work and try and pray and work, and things might get better for a while, and then we hear of more pain and suffering in the world. We cry out to God, “Save us!” but sometimes the suffering is so much that we aren’t sure God can fix it either.

The angel said to Mary–and to us–nothing will be impossible with God. On this first week of Advent, walk in hope’s impossible light. For, what seems impossible to us is possible for God. All God asks of us is our faithfulness. Let us join our voices with Mary today: “Here we are, the servants of the Lord; let it be with us according to your word.”