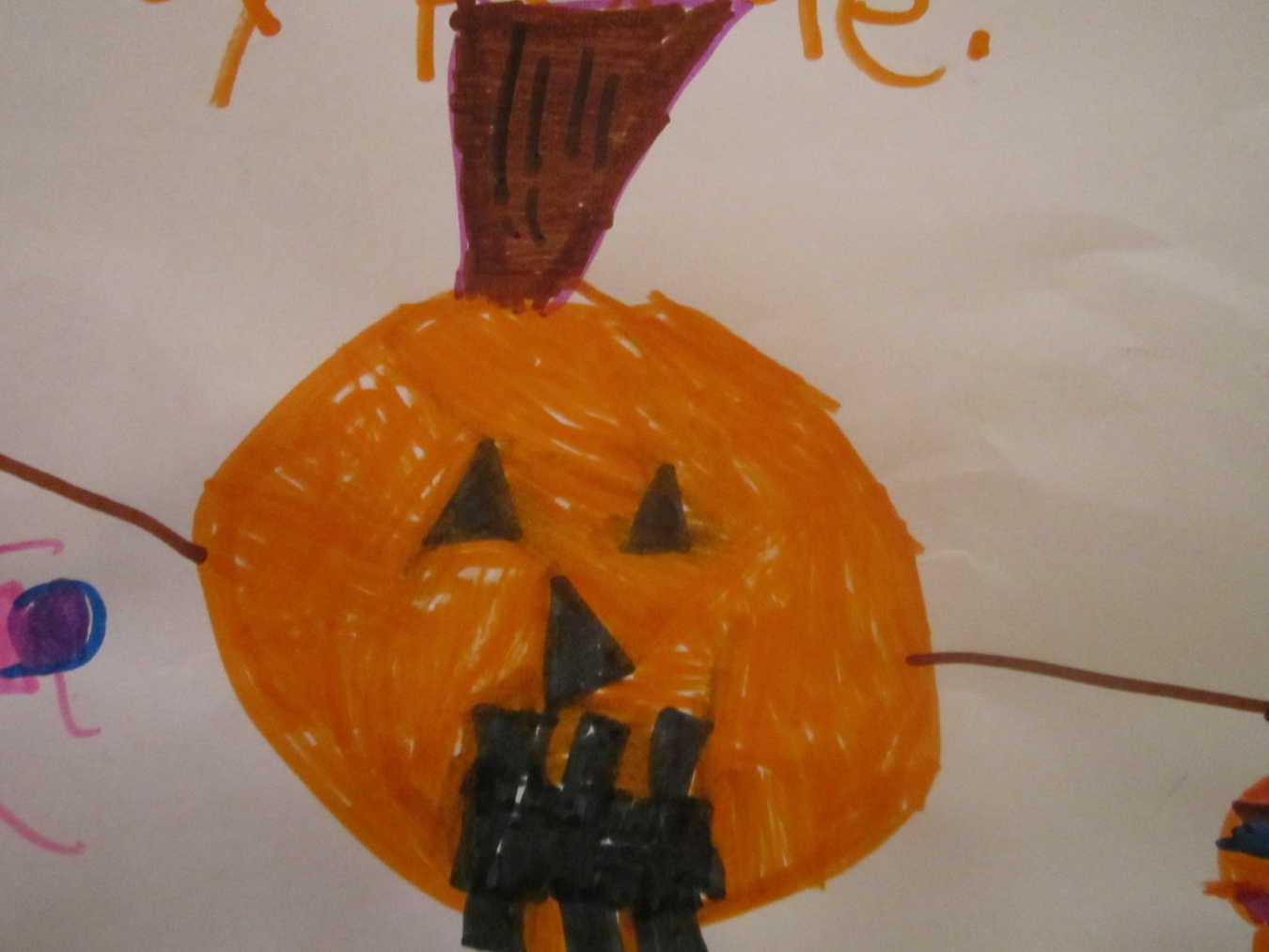 Walking Free from Fear of Halloween

*artwork used with permission from a piece called “Pumpkin of Horore and Candy Peeple” by M., age 6

When I was a kid, I enjoyed Halloween. My brother and I would choose our costumes, usually something simple we could make at home, or something that could be assembled from inexpensive items from the store. My mom reminded us not to choose something too scary or gory, and for the most part we didn’t have a problem abiding by that simple guideline.

My brother was a vampire a few times (sans gory accessories). I honestly don’t remember most of my costume choices. But I remember that I enjoyed myself, and I spent time with my family (and friends as I got older) collecting candy around the neighborhood. It was like a sugary dream-come-true.

As I got older, my friends either outgrew trick-or-treating, or opted for more gruesome costumes. A few were more imaginative with their choices, but it seemed the pre-teen and teenage costumes of choice were usually the goriest ones.

I always worried that the scary costumes would be too much for little ones who were out trick-or-treating. I wondered how many of those over-the-top costumes showed up in the nightmares of those little kids when they slept off their Halloween excitement that night.

I confess, I’m probably a bit naïve. I’m sure I’m over-protective. Even though I know there’s only so much I can do about it I try to keep my kids from seeing horrifying things. I cover their eyes (or change the channel) if a much-too-mature movie preview comes on during what was supposed to be a family show. I want to protect them and keep their hearts and minds fear-free for as long as I can.

But, that’s not really what I want to talk about. Instead, I want to tell the story of how my view of Halloween has shifted. I went from enjoying the imaginative fun of dressing up and getting more candy in one night than I would ever see the other 364 days a year, to liking parts of the fun and being frustrated by the gruesomeness of Halloween, to terrified and sitting at home alone wishing I could skip Halloween every year and go straight to November 1st.

Perhaps that seems a little extreme to say I was terrified of Halloween, but I really was.

When I was in middle school, I started hearing people say that Christians didn’t celebrate Halloween. My parents weren’t the type to boycott cultural celebrations, and they largely allowed us to participate in trick-or-treating and dressing up with a few guidelines about not celebrating gore or demons.

I started noticing alternative “Fall Festivals” in church basements, and even went to a few. They were fun, but I still went out trick-or-treating with my friends afterwards. To me, it all seemed harmless:  using our imaginations, time with friends and family, way too much sugar, and fun – well, unless it was snowing and you were trying to trudge around in a flimsy costume on a dark, cold night.

In high school, I was introduced to another idea: the idea that participating in Halloween in any way, shape, or form was participating in worshiping the devil. I watched videos at church about the origins of Halloween (which somehow all left out the religious origins of All Saints Day), and heard warnings that I needed to be vigilant or, on Halloween, I would find myself entertaining evil spirits who would then lead me astray from my walk with God.

I was also told that every Halloween on the hill by my house, the witches would gather to sacrifice a human – preferably a teenage virgin.

There was pretty much no quicker way to terrify every single teenage, youth group girl (most of whom had recently participated in True Love Waits, or some other program that focused on sexual purity) off the streets than to tell them they were being hunted.

I was so terrified of what I had been told that I would go to school afraid that I would somehow accidentally participate in Halloween, and I would come home and watch the clock tick by, every minute closer to November 1st, and freedom from the dangers of evil spirits that seemed to prefer this one night over all the rest.

In college, I encountered all kinds of opinions about Halloween, ranging from sheer terror to absolute delight. I had classmates who would buy candy to hand out to any kids who came trick-or-treating by the dorms. I had friends who made a point of watching a movie marathon in their rooms with the doors shut, just passing the night away.

I have come to view the whole thing as a Romans 14 situation. Some find costumes and trick-or-treating to be a stumbling stone. Others do not. What’s important is following what our consciences tell us. And it’s important that in our freedom, we don’t needlessly cause other people to struggle with their faith.
I respect the decisions of my friends and family who simply cannot celebrate Halloween. I would never judge them for their convictions, and I respect the difficult work they’ve done to figure out what’s best for them and their families.

For me, I have decided to celebrate Halloween. I don’t glory in talk of demons, or enjoy scary costumes. I don’t watch horror movies. And I prefer to be home with my kids before it’s terribly dark outside. But, for me, participating in Halloween is freedom.

As a teenager, when I would hide away and count down the minutes, it was as though I believed that the light couldn’t be overcome by the darkness, except on Halloween. Living in fear of Halloween took away my joy.

Finding fault with every decoration, every costume, and worrying about whether or not I had flirted too much with the demons by eating some candy pumpkins was a terrifying way to live. It was like I was in a prison, and finding ways to participate in Halloween without glorifying violence and demons was like finding the prison door open.

I have come to believe that God doesn’t want me to be afraid. The God whose messengers told countless terrified people “Do not be afraid,” did not want me to cower in fear that perhaps one night a year the good news wouldn’t be strong enough to overcome the bad.

This year I’ll probably take my kids to a handful of houses in our neighborhood, and maybe to some church family’s houses so they can see our kids all dressed up. I’ll have my porch light on so I can hand out candy and show hospitality to the kids who come by. And, I’ll probably go to bed early because that’s how I live it up.

But at least this year, I won’t be afraid. Hopefully I can wake up on Halloween and exclaim, “This, too, is the day the Lord has made. I will rejoice and be glad in it.”