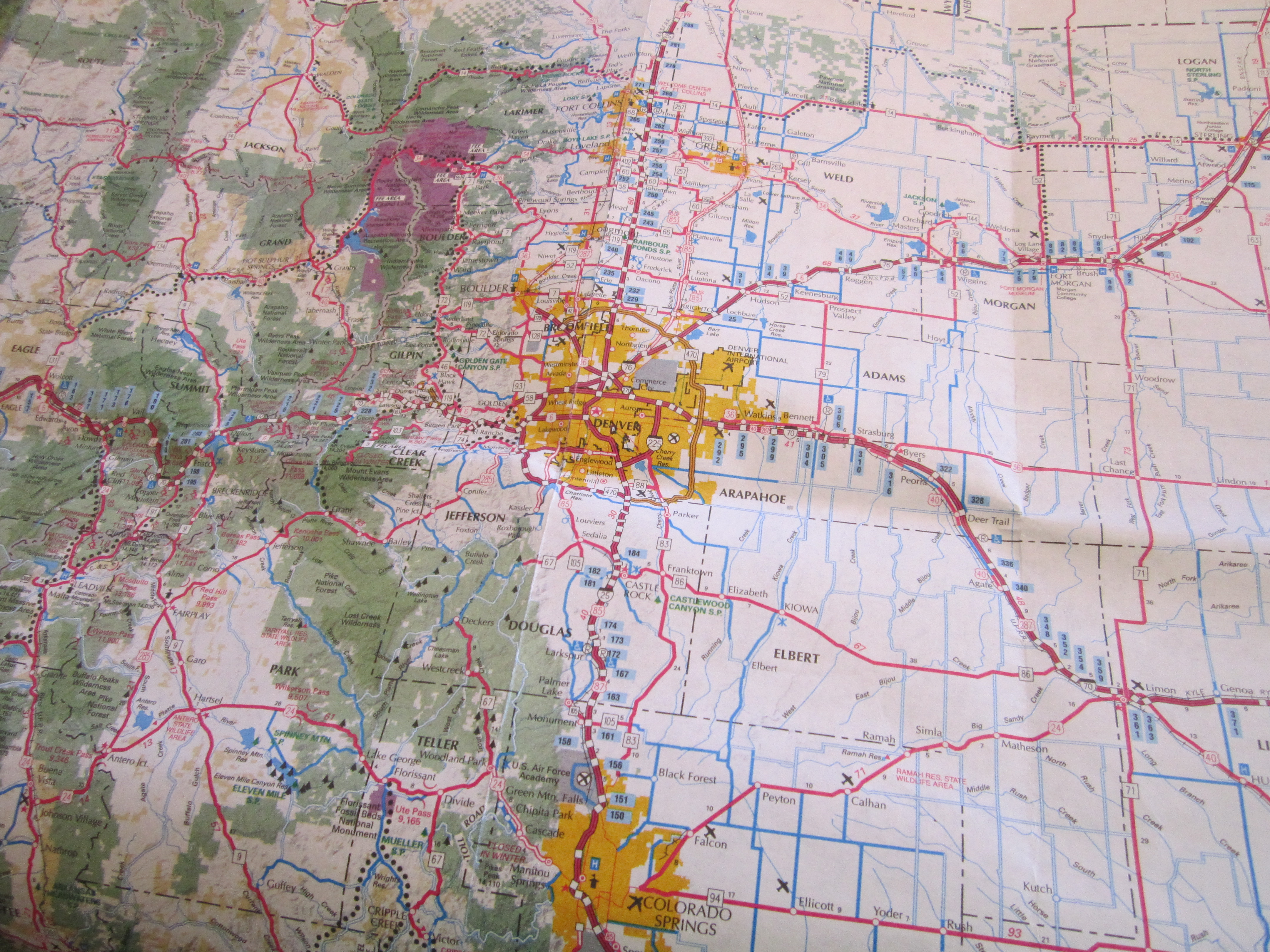 When We Aren’t There, Here Matters

How many of you have a GPS device in your car or in your cell phone? Did you know that 7% (or more) of American drivers have one in their car? That is about 220 million vehicles that have some kind of GPS system in them. GPS stands for Global Positioning System, and it works by interacting with a system of satellites to pinpoint your location, and then overlaying that information with maps and data stored inside of the GPS itself. GPS is a pretty accurate way to get directions, to locate a gas station near your route, and to find a place to eat in a city where you’ve never been. I have a little GPS that sticks to the front windshield of my car. It has helped me find rural churches, get to meetings on time, estimate how long a trip might take me, and find a rest area when on a long trip with my family. It can be a wonderful tool, but as is true for all kinds of other wonderful tools, problems can arise among GPS users. Did you know that in the United Kingdom, at least 300,000 accidents have been caused – at least in part – by the usage of a GPS in the vehicle? And 25% to 30% of all accidents in the United States have been attributed to distracted driving. In rural Wedmore, England, several truck drivers have become wedged between buildings because the GPS directed them down roads that were not large enough to accommodate trucks. In the United States, a man was prompted to “turn right immediately.” When he did so, he realized he was driving on the railroad tracks rather than a road. In an article about accidents and GPS technology, Maria Trimarchi suggested that these accidents could be caused by drivers “relying more on what their GPS device tells them and less on maps, or because they’re ignoring common sense or their own eyes.” *

GPS is a great thing if you remember you aren’t in there. The road you are driving on isn’t on the neat, orderly grid in that little box on your windshield. There are things on the road: unexpected hazards, pedestrians, road closures and construction, bits of new development, human-made lakes, and even roads that no longer exist. If you aren’t there – in the digital map of the GPS – then you have to pay attention here – on the road in front of you. Our passage this morning from 1 Corinthians 4 is difficult to understand all on its own. At face value, it seems as if the apostle Paul is congratulating the Corinthian church on having arrived. They are rich, they are like kings, they are held in honor. But Paul is actually mocking the over-confidence – even arrogance – of the Christians at Corinth to try and get them to see the error of their ways. It seems that the Christians in this church forgot that God’s kingdom wasn’t fully here on earth yet. They knew that the good news of Jesus was good news for them spiritually, and they began to focus on the spiritual aspect of things to the exclusion of the trials of the world around them. One New Testament scholar writes this about our passage for this morning: “Many scholars suggest that a common thread weaving its way through all these pastoral problems [in the Corinthian church] was a lack of eschatological balance…They thought that, because they had already entered the spiritual realm, their bodies were essentially matters of indifference, and that bodily structures of this world were irrelevant to true spirituality.” *

Last week, Pastor Jeff talked a little bit about paying attention to the signs of the times without thinking we’ve got the end all figured out. The study of the last things, or the study of the “end times” as it is sometimes called, is called eschatology. There are many different ideas about what the end might look like, but one prevailing idea in Reformed circles is called “the already/not yet.” Basically, Jesus’ life, death, resurrection and ascension have brought to us – here and now – benefits of God’s kingdom. We experience glimpses of God’s kingdom here and now. We experience hope, love, healing, kindness, the building up of the church, lives changed by the gospel. We experience those things here and now. That is the “already” – what we experience of God’s good news already in this life. But, if we are paying attention, it doesn’t take long before we realize that not everything in this world is a reflection of God’s kingdom. There is suffering, loss, grief, illness, broken relationships, imperfection. This is the “not yet.” This is the reality that although we can experience life change here and now through the gospel of Jesus, we aren’t there yet. We’re still here, on this earth, dealing with imperfection, poverty, brokenness, and myriad other things that remind us God’s kingdom hasn’t come in fullness.

The problem with the church in Corinth was that they thought God’s kingdom was here in fullness – spiritually. Or as one New Testament scholar put it:

“Paul here contrasts the triumphalism of the Corinthians with the suffering example of the apostles. Christian faith is not about transcending and escaping the troubles of this world, but about the sacrificial offering of lives to one another in hope and love. It is the ‘not yet’ side of the ‘already/not yet’ tension – the embrace of suffering and sacrificial love – that the Corinthians are missing. They need to remember that the resurrection still lies before them.”

The Christians in Corinth were focusing so heavily on spiritual things that they were leaving a rotten example with their bodies. In chapter 5, Paul points out that they tolerate sexual immorality in their midst – immorality that is so bad even the pagan cults wouldn’t tolerate it! In chapter 6, Paul talks about how they can’t even resolve their own disputes. They bring their issues to secular court, which is to their shame. In chapter 7, Paul addresses their idea that husbands and wives shouldn’t even touch each other so that they could focus on spiritual things instead. Paul reminds them time and again that our bodies and what we do with them is very important. They cannot be neglected, and we should not be over-focusing on spiritual things because we live here on earth in our bodies. We aren’t only spirit, we are bodies. We are enfleshed spirits, and what we do with our bodies here and now matters.

Paul makes two important claims later on in our passage. First, in verse 16 he says, “I appeal to you, then, be imitators of me.” He has just finished telling the people he’s writing to that he has been made a spectacle, counted as a fool. He is weak, held in disrepute, hungry, thirsty, homeless, poorly clothed, beaten, and weary. In all of these trials, he has spoken kindly, he has endured, he has blessed. Even though he is like the dregs of all things, he continues to give the praise and the glory to God. And all this without ignoring the harsh reality of his present situation. He knows he’s struggling. He acknowledges his weakness. He feels the pain of abuse and persecution, but he continues to speak kindly, to bless others, and to use his life to point to the reality of the Savior – Jesus Christ. On this fifth Sunday of Lent, God is calling us to find a balance in our lives. On the one hand, we need to be like the Corinthian Christians who know the real and awesome power of Jesus. We need to be growing spiritually, spending time in prayer, longing for closeness with God, but that’s not the end of things. What we do with our bodies matters. How we treat them sends a message to the world. The kinds of relationships we keep, the way we dress our bodies, the things we eat, our attitudes about this world, all of these things matter. In the previous chapter, we find these familiar verses: “Do you not know that you are God’s temple and that God’s Spirit dwells in you? If anyone destroys God’s temple, God will destroy that person. For God’s temple is holy, and you are that temple.” If we are God’s temple, how we treat ourselves and others matters. It sends a message about how we view our God.

We are to imitate the life of the apostles who went through hardships, but continued to draw closer to God, both spiritually and with the way they lived their physical lives on earth. Second, Paul writes, “For the kingdom of God depends not on talk but on power.” It doesn’t matter how holy we say we are. It doesn’t matter if we use more words than our neighbor when we pray. God’s Kingdom doesn’t depend on our words. It depends on power – and not our power! It depends on the power of the Holy Spirit, the power of God. We can’t force it. We can’t trap God’s power by being powerful, convincing, persuasive or anything else. The Corinthian church thought they had a corner on God’s kingdom because they were ignoring their bodies and their lives in favor of praying more and doing more outwardly visible acts of worship. Paul reminds them – and us – that it isn’t about us and what outwardly spiritual things we do. It’s about the transforming power of the Holy Spirit.

This fifth Sunday of Lent, I invite you to take an inventory of your life – both your spiritual life, and your life here in the physical stuff of the world. Is there balance between the already – the blessings and amazing transformation here and now – and the not yet – the realization and longing that we are not perfectly there yet? Are we living here, or are we stuck out there somewhere? I’ve heard the expression that some people are “so heavenly minded that they are no earthly good,” and I think that’s the heart of what Paul is getting at here. What good is it if we know all the right prayers, attend all the most prominent services, can recite Scripture without a second thought, if our lives are falling apart everywhere else? As we journey closer to the cross, closer to the tomb, and closer to the sacrifice of Jesus, I wonder what would happen if we spent some time reflecting on what our outward lives say about our inward faith. May the Holy Spirit convict us of sin, uncover whatever idols we worship, and lead us in the way everlasting. Amen!

*sources are available upon request