Now You See It – A Transfiguration Sunday Children’s Lesson

March 2, 2014 – Last Epiphany/Transfiguration Sunday
Revised Common Lectionary Year A – Exodus 24:12-18, Psalm 2 or Psalm 99, 2 Peter 1:16-21, and Matthew 17:1-9.
Transfiguration Sunday is a complex Sunday in the church year. The Gospel passage is most prominent, as it gives the account of Jesus’ Transfiguration before Peter, James, and John high up on a mountain. In that moment, the three disciples are confronted by the glory of Jesus. They see Elijah and Moses, and they are at first bewildered. After hearing the voice of God they are terrified. The Transfiguration of Jesus is a moment at which the divinity and glory of Jesus are put on display, and Transfiguration Sunday seeks to capture this moment, while at the same time preparing worshipers for the journey they are about to embark upon during the season of Lent.
Teaching about the Transfiguration can be tricky, and it is even more complicated when explaining the story to children who are in the midst of developing their capacities for logical reasoning (ages 5-7). In some ways, this makes it easier. Very young children are often more imaginative, and may have less difficulty understanding how the human Jesus could also be fully God. They may make natural connections to stories of superheroes who have hidden powers. Or, as these logical reasoning capabilities become stronger, they may start to be skeptical, and ask questions that cannot be answered. “How did it happen?  Why did Jesus’ glory appear and then disappear?”
The children’s lesson idea below is something that can be beneficial to children of a variety of ages. For very small children, it shows how something can appear without really changing what was there originally. For slightly older children, it can give the opportunity to memorize the words of God that are recorded both in the Gospel account, and in the re-telling in 2 Peter 1. And, for adults who might be in the congregation if this is used during a worship service, it may teach the story of the Transfiguration of Jesus in a way they had never thought of before.
Now You See It – A Transfiguration Sunday Children’s Lesson
Supplies Needed:
A sheet of plain paper
Lemon juice
Cotton swabs
An iron and ironing board
To Do in Advance:

You may want to make a practice sheet of paper so that you know how much lemon juice to use, and so you can get an idea of how long it will take for the iron to reveal the message. Using a cotton swab as a paint brush, write the words, “This is my Son. Listen to him!” on a plain piece of paper. The paper doesn’t have to be white, but the message will be easier to see on lighter colored paper. Allow the paper to dry. With a very cool iron (I set mine to 2) press the paper to get some of the wrinkles out. When you heat the message to reveal the words, you will want the iron set higher (I set mine at 6).

—–
In the book of Matthew, Jesus had just told his disciples that they may face difficult things in their lives. He tells them to take up their cross and follow him. I bet that was very difficult for them to understand. They were already having difficult times. Many of them had left their jobs and their families to follow Jesus. But then Jesus promises them that they will soon see his glory. I can imagine that what Jesus was saying was confusing to them. It would have been confusing to me.
Six days later, Jesus went up on the mountain with Peter, James, and James’ brother John. And while they were up on the mountain, the Bible says Jesus was transfigured. Transfigured is a big word that we don’t use very often.  Do you know what it means? Being transfigured means to change in appearance or shape. But, what’s really amazing about the Transfiguration of Jesus is that when his glory was made known to the disciples, he wasn’t changing who he was. We believe that Jesus was both a real person, and also fully God, but the people around him didn’t see that. They just saw him as a man.
When Jesus was transfigured, his clothes became bright white. His face was so bright it was shining like the sun, and the disciples were confused. But, then God spoke and said, “This is my Son, the Beloved, with him I am well pleased. Listen to him!” And they were afraid. How do you think you would have felt if you had been on that mountain with Jesus? Jesus said to them, “Get up and do not be afraid.” And when they looked up, Jesus was alone, and looked like a normal person again.
I brought with me a piece of paper. This paper has an important message on it…but it looks like a regular piece of paper, right? Give me just a minute…I want to do something to the paper. (At this point, use your iron or whatever heat source you are using to make the message appear on the paper. Make sure that you have the heat source in a place where none of the kids will get burned or hurt.  It helps to iron both the front and the back of the paper to reveal the message.) 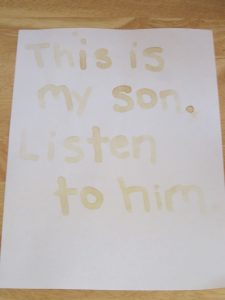 Can someone read the message to me? “This is my Son. Listen to him!” When the three disciples on the mountain saw Jesus’ glory, God told them to listen to Jesus. And, even though we weren’t up on that mountain top, sometimes we see Jesus too. When we are afraid or alone, sometimes we feel him with us. When we experience really happy or exciting things, sometimes it makes us want to praise God. It’s almost like God is saying to us, “This is my Son. Listen to him!” Once we’ve listened and learned about Jesus, it’s our turn to tell others about him.  Let’s pray together.
Dear God, when we read about Jesus’ Transfiguration, sometimes it is hard for us to understand. Help us to see your amazing power and glory so that we may know you, and so that we may tell others about Jesus. We pray this in Jesus’ name – Amen.