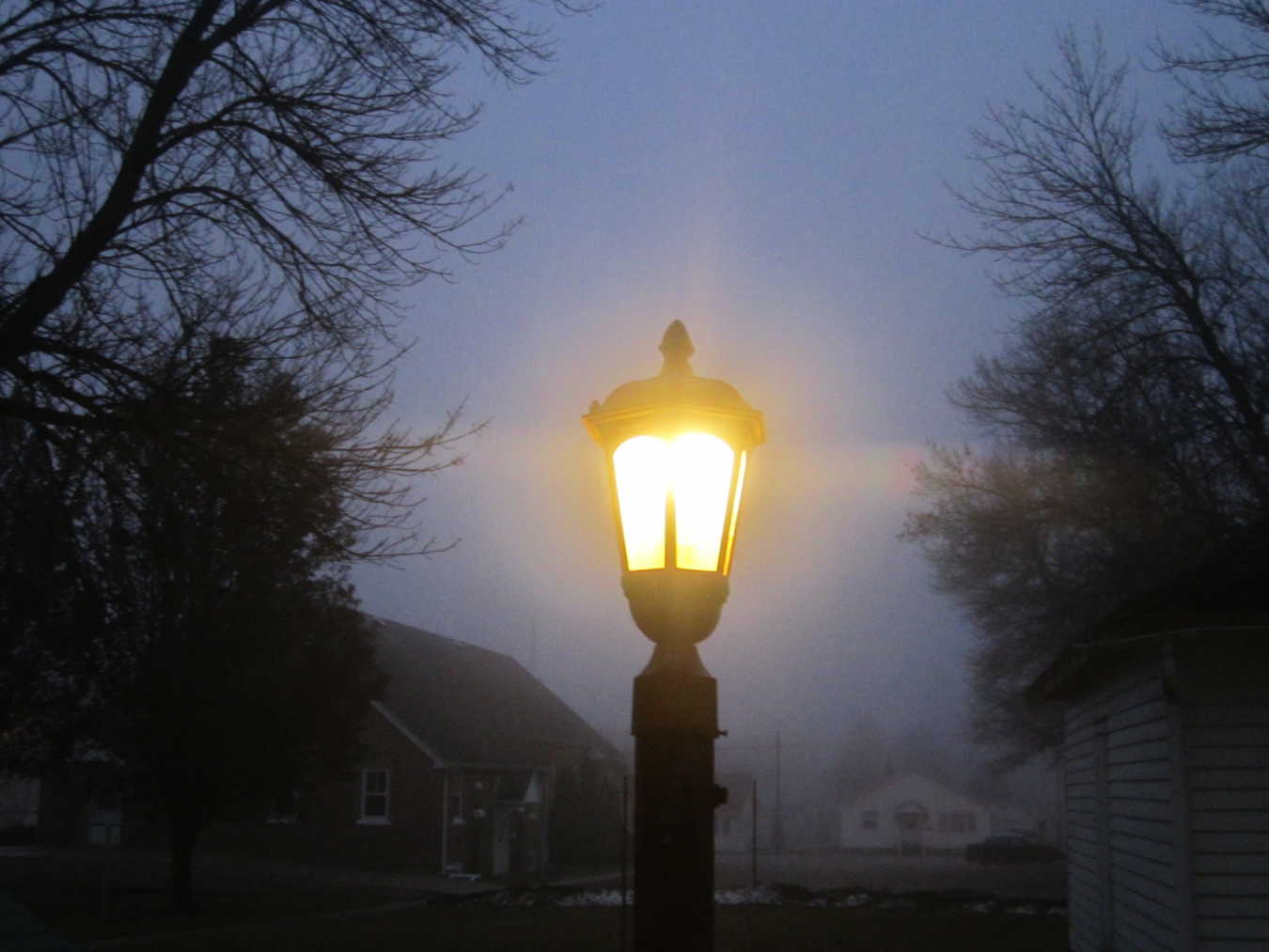 At my house we have a Christmas countdown. I suppose it is a little bit like an Advent calendar, but rather than counting up, it counts down. There are two wooden blocks with numbers on all sides of them and each evening, the kids rearrange the blocks until they display they number of days left between now and Christmas. It’s fun. It’s hands-on. And, it is a physical way of being involved in the anticipation and waiting.

But, waiting is hard. It’s a lot of work. It requires patience and hope. Sometimes waiting is exhausting. It can make us anxious, and on our worst days we may wonder if the waiting will ever end. And that’s why this third Sunday of Advent is a little different from all the rest. This Sunday is known as Gaudete Sunday – Gaudete meaning “rejoice!” The candle we light is rose colored as an encouragement to us that our waiting will not be endless.

There’s a light at the end of the tunnel. We’ll get there eventually. Rejoice! Be encouraged!

Isaiah 61 was a message to a broken and hurting people. They were still recovering from the conquest. The temple had not been restored to its former glory. There was still suffering and longing and wondering. Into this turmoil and waiting, the words of the prophet came like a burst of light and hope: “The spirit of the Lord God is upon me, because the Lord has anointed me; he has sent me to bring good news…” Good news. Finally.

And I imagine those words of hope were like the flickering light at the end of a long, dark tunnel. Have you ever had that moment where there was suddenly a light at the end of the tunnel when there hadn’t been one before? Sometimes even knowing that there is an end to the tunnel brings such relief. The good news the prophet was bringing was astounding: good news to the oppressed, binding up for the brokenhearted, liberty to captives, and release of prisoners. Justice, healing, and freedom were coming. The suffering would not go on forever.

This would be the year of jubilee, something that only came about every fiftieth year. Good news when good news was most needed. Those who were mourning would be provided for; their ashes – a sign of their mourning – would be replaced with a garland – like those worn at a wedding feast. Instead of mourning, they would receive the oil of gladness. Instead of a faint spirit, they would be clothed in the mantle of praise. The good news was, as Lew Smedes once said so perfectly, “that joy is possible even when pleasure turns to ashes.” Good news was coming. Help was on the way.

I was reminded of a scene at the very beginning of the wonderful little book The Lion, the Witch, and the Wardrobe:

“This must be a simply enormous wardrobe!” thought Lucy, going still further in and pushing the soft folds of the coats aside to make room for her. Then she noticed that there was something crunching under her feet. “I wonder is that more moth-balls?” she thought, stooping down to feel it with her hand. But instead of feeling the hard, smooth wood of the floor of the wardrobe, she felt something soft and powdery and extremely cold. “This is very queer,” she said, and went on a step or two further.

Next moment she found that what she was rubbing against her face and hands was no longer soft fur but something hard and rough and even prickly. “Why, it is just like branches of trees!” exclaimed Lucy. And then she saw there was a light ahead of her; not a few inches away where the back of the wardrobe ought to have been, but a long way off. Something cold and soft was falling on her. A moment later she found that she was standing in the middle of a wood at night-time with snow under her feet and snowflakes falling through the air.

Lucy felt a little frightened, but she felt very inquisitive and excited as well. She looked back over her shoulder and there, between the dark tree-trunks, she could still see the open doorway of the wardrobe and even catch a glimpse of the empty room from which she had set out. (She had, of course, left the door open, for she knew that it is a very silly thing to shut oneself into a wardrobe.) It seemed to be still daylight there. “I can always get back if anything goes wrong,” thought Lucy. She began to walk forward, crunch-crunch over the snow and through the wood toward the other light. In about ten minutes she reached it and found it was a lamp-post. As she stood looking at it, wondering why there was a lamp-post in the middle of a wood and wondering what to do next, she heard a pitter patter of feet coming toward her.

There, at the intersection of Lucy’s world and Narnia, was a lamp-post to light the way. It stood there, even though it was out of place, as a ray of hope into the darkness. And it marked the way. What if I told you that we are like lamp-posts? Each of our stories are like mighty oak trees, planted to display God’s glory. The way God has reached into our lives and been near to us in our grief, the way God has met our needs even when that seemed impossible, the way God brought healing to our brokenness – these stories are like mighty oaks of righteousness meant to display God’s glory.

Something that has been very helpful to me as I’ve learned how to study the Bible is bearing in mind that no detail is insignificant. Whenever we come across a strange word or phrase, it can be helpful to try and remember any other time that phrase has been used throughout Scripture. As I was reflecting on what it means to be planted by God as oaks of righteousness, I immediately thought about another time when oaks appeared in the Bible.

Abraham and Sarah had longed for a child. God had promised to make Abraham the father of many nations, which probably sounded ridiculous (and maybe even painful) to Abraham. Abraham wanted to believe God’s promise, but it was difficult, and the older Abraham got, and the older Sarah got I can imagine that hope would have been fading fast. And then in Genesis 18, by the oaks at Mamre, the Lord appeared to Abraham, and three men told him that he and Sarah would have a son at that time the following year. There, by the oaks at Mamre, God told Abraham that the promises God had made were about to be fulfilled.

An interesting thing about Hebrew is that one word can mean many different things. And as we continue on in the story of Abraham, we read the troubling story about a time when God asks Abraham to sacrifice his one and only son. Our hearts break as we wonder how on earth God could promise a child and then expect a parent to sacrifice that child. The details are awful, and all along in the story we are reminded time and again that this is Abraham’s son – his only son – the one that he loves. At the very last moment, as Abraham is about to go through with this terrible act, an angel of the Lord called out to him and told him not to follow through with it. And there, caught in a thicket, was a ram provided by God to be offered as a sacrifice instead. I had never realized before that the word for “oaks” can also be translated “ram.” The ram, given here to Abraham, is evidence of God’s provision and mercy. The oaks of righteousness stand as testimonies to God’s provision and mercy.

The lamp-post for Lucy was a visible sign, a reminder of how to get home. It lit the way. Even though it was out of place in the midst of the woods, it was planted there to guide the path. The oaks at Mamre stood as a sign in the midst of hopelessness that new life was possible. The ram was a sign of God’s provision. The oaks of righteousness – the stories of our healing and redemption – are planted by God in the most unlikely of places to display the glory of God. And it is that glory that lights the way home. Sometimes that light is close and shines brightly. Other times we can hardly make it out.

We need each other on this difficult journey.

Sometimes joy seems to be springing up and out of our hearts, and other times joy is a struggle – maybe even something that seems impossible. I love the image in verse 11: “For as the earth brings forth its shoots, and as a garden causes what is sown in it to spring up, so the Lord God will cause righteousness and praise to spring up before all the nations.” Even in winter, even when life and joy and fullness seem impossible, righteousness and praise have been planted. May God cause the joy to well up in our hearts and grow like mighty oaks that display the glory of the Lord. Into the darkness and difficulty of waiting, may we find the light shining brightly enough for us to see by. As we wait by the empty manger for the coming of Jesus, may we be assured that God will not leave us nor forsake us. Even so, come Lord Jesus.