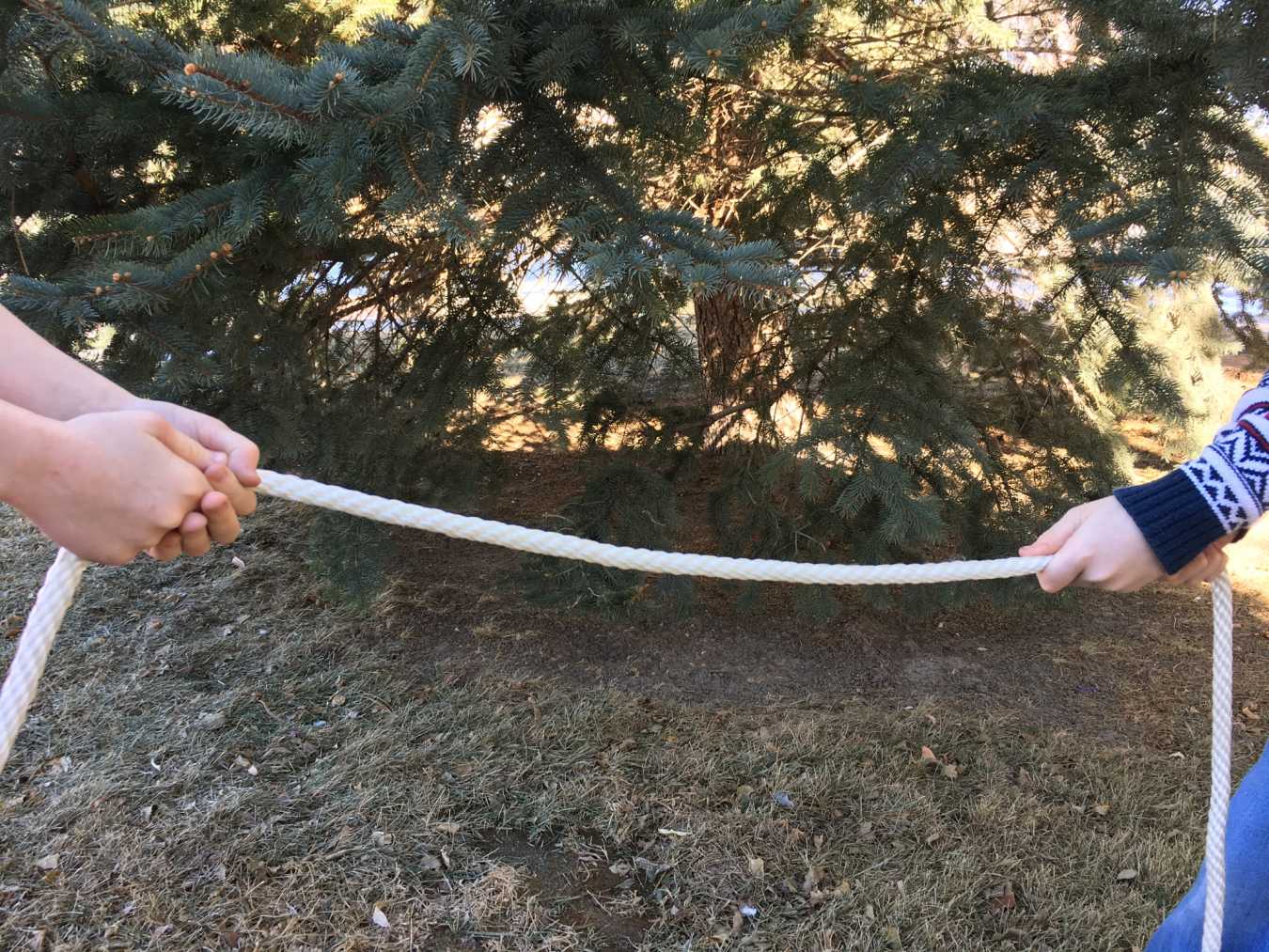 1 Corinthians 1:10-18 : “Now I appeal to you, brothers and sisters, by the name of our Lord Jesus Christ, that all of you be in agreement and that there be no divisions among you, but that you be united in the same mind and the same purpose. For it has been reported to me by Chloe’s people that there are quarrels among you, my brothers and sisters…” (read the rest here)

About three years ago, I was the fittest I had ever been in my life. I was running 15-20 miles a week. I was making healthy food choices. I was drinking at least 64 ounces of water a day. It was great. I had so much energy, and if I ever missed a running day, I couldn’t wait to get back out there and run again. I had trained for a 5 mile trail run, and though I wasn’t fast – I came in dead last…well, the sweeper came in last, and I was one step in front of him – I ran the whole way and felt great about what I had accomplished.

The hardest part about being a runner – for me, anyway – are the winters. I didn’t own a treadmill, and I’m not someone with a high tolerance for cold. So, I would run in the summer and fall, and take a break through the winter. Well, about three years ago, I decided I was going to run inside instead. I don’t particularly care for treadmills. You feel a bit like a hamster running in a wheel that never goes anywhere. So, I ran on the indoor track instead. I did this for about a few months. Every other day I would run on this track…always running the same direction on the track.

One day when I went to turn on the track, I took a step, and I instantly was overwhelmed with pain.
To make a long story short, I injured my hip because the muscles on the right side of my body had tightened and shortened from always running the same direction on the circular track. My diagnosis: repetitive use strain. My treatment: four months of physical therapy.

Taking those tight turns on the track caused the muscles in my body to work against each other. My right side stiffened and shortened, and my left side tried to compensate by lengthening. I ended up injured and unable to run. In fact, I still struggle with running because that shortening and stiffening of the muscles will probably be a lifelong issue for me.

In our Scripture reading for this morning, Paul talks about conflict within the Corinthian church. We find out as the book of 1 Corinthians progresses that there were many conflicts taking place beyond the one described here. But, in this particular situation, it seems that people were forming divisions around who was baptized by whom. Paul urges the people to put aside these differences, and to be united in Christ.

Or, a possible modern paraphrase: “Can’t you all just get along?”

When I was in high school, we had moved to a new community and we were trying to find a church home. My parents asked people in each church we visited why they chose to belong to the churches they were in. One person told my mom, “We are all of the same mind here. We never disagree on anything.”

We never went back to that church again.

Is that what Paul is talking about here when he urges the Christians at Corinth to be of the same mind? When he urges them not to have any divisions among them, is he saying that disagreement is not allowed? Does he want the church in Corinth to be made up only of people who agree about every single thing?

William Wrigley Jr., founder of the William Wrigley Jr. Company of 1891, and namesake of Wrigley’s gum, was once asked what qualities he looks for in good employees. Surprisingly, he responded that he preferred an employee who had the courage to disagree with him. In an interview he once put it this way:

“Likewise, one of the biggest pests in business is the carbon copy—the fellow who always says: ‘Yes, Mr. Wrigley, you’re absolutely right.’ Perhaps meaning: ‘Have it your own way, you old buzzard, what do I care!’ “Business is built by men who care—care enough to disagree, fight it out to a finish, get facts. When two men always agree, one of them is unnecessary.”

When Paul writes to the Corinthian church that they are to be of the same mind, I do not think he was telling them they should never disagree. A closer look at the Greek reveals a bit more of what Paul meant by these words. The words used here in 1 Corinthians 1:11 carry with them some imagery from fishing and from sewing. The word used here for divisions – σχίσματα (schismata)– is also used in both Matthew and Mark. In the Matthew account of Jesus’ teaching, it says this: “No one sews a piece of unshrunk cloth on an old cloak, for the patch pulls away from the cloak, and a worse tear is made” (Matt. 9:16). That word “tear” is our word here in 1 Corinthians for division. The word translated as “united” calls to mind the imagery of fishermen mending their nets.

Paul is less concerned about the Christians finding themselves in agreement over opinions and trivial things. What Paul is speaking of has more to do with direction and with purpose. Paul does not want to see the church engaged in tug of war, each side pulling against each other until they are torn in two. Instead, he urges them to be united in their conviction and in their purpose. They are to unite themselves in moving towards Christ, even if there may not always be agreement along the way. They are to be knitted together like a mended net so that, together, they might work together for the same purpose, and move toward the same goal. If we are united – knitted together – in Christ, and are moving forward with conviction toward the same purpose, we may not always agree – in fact, we certainly won’t always agree – but we can remain the body of Christ.

I recently came across a sweet story about a couple who had been married for 50 years. I’ve seen this story in a few different places, slight details changed, but the message still the same. The man and woman were committed to each other, they shared everything, and they didn’t keep any secrets from each other – other than a small shoe box the wife kept on a high shelf in her closet. Shortly after they were married, she had placed the box up there and asked her husband never to look inside of it or ask her about it. All through their marriage, he honored her wishes.

After these many years, the wife grew ill and the doctors were not optimistic that she would recover. Her husband remembered the shoe box and decided now was the time to ask if they could open it. His wife agreed, and inside the box were two crocheted dolls and a roll of money that totaled $95,000. The husband was shocked.

The old woman explained that the day before they had been married, her grandmother had encouraged her that no matter the argument, she and her husband should work hard to reconcile. If they were unable to reconcile, she should keep quiet and crochet a doll. The man was so touched to think that there had only been two times during their lengthy marriage that she had found herself unable to reconcile. Then he asked her about the roll of money. His wife responded, “Every time I crocheted a doll, I sold it to a local craft fair for $5.”

Brothers and sisters – we will face disagreements with each other, with our families, and with our friends over the time we have together. But we can still be united in conviction and purpose as we seek to follow Jesus. We can still find ourselves moving in the same direction rather than tugging against each other. We can be knitted together like mended nets and cast out into the world – together – as we seek to follow Jesus’ lead.

So, what’s our purpose?

Our purpose, our conviction, our direction may be solitary, but we are each given different gifts, different perspectives, and different strengths as a part of the wider body of Christ. Rather than silencing those differences and blending ourselves into a group of people where everyone is the same, I believe that through Paul’s words to the Corinthians we find that it is precisely in our differences that we can find common conviction and purpose. Our differences are not disagreements. If every one of us agreed on every single thing, we’d only need one of us, right?
The challenge before us is learning how to bring together all our differences and still find a way to move together towards Jesus. But, we will be stronger for it.

Soren Kierkegaard once said something that, to paraphrase, means that anyone can be an individual. The real challenge is in being a crowd because a crowd only works if there are distinctives and differences among all of the individuals in that crowd. Similarly, the body of Christ will cease to be a body if we all become an eye, or an ear, or an arm. It is our distinctives that make us a body.

How might God be calling each of us to do ministry in this place and in our community in our own diverse ways?

Perhaps we will have disagreements along the way. Or, more accurately, it is certain we will. When those times arise, let’s commit to mending our nets together so that we can once again move towards Christ, in whom we live and move and have our being.