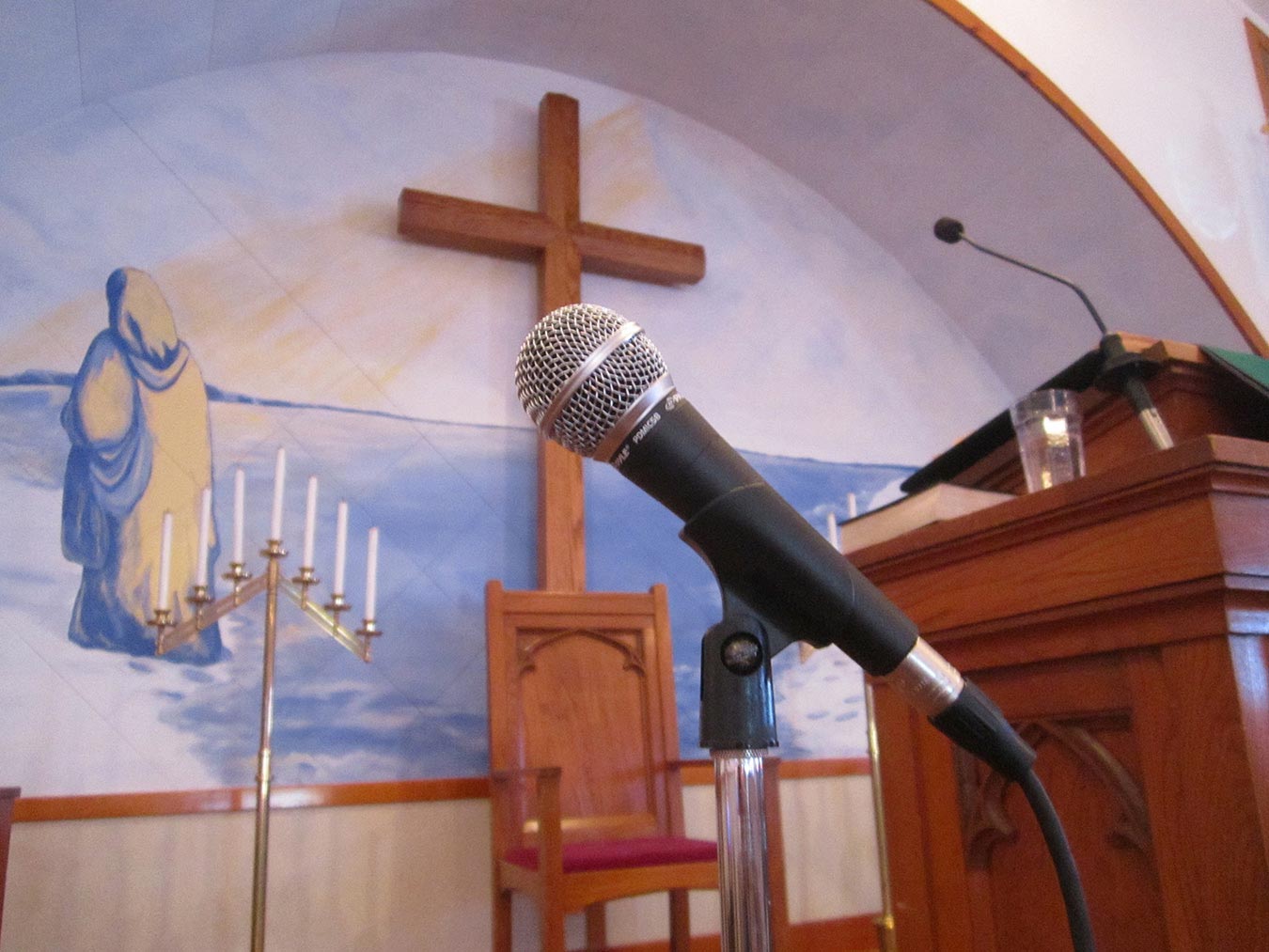 If a Karaoke Bar Came to Church

You walk into a room that is filled with tables. A small stage is positioned in front. The lighting is dimmed, and a screen comes down near the stage. Everyone seems to be finding places to sit, so you find a spot next to a friend. Once you’ve found a comfortable place to sit, drinks are passed around. Smiles are on most everyone’s faces, and conversations are happening at every table. You and your friend start sharing stories of struggles and laughter from the things that have been happening in your lives. It’s been far too long since you’ve taken the time to catch up with each other.
After some time has passed, someone gets up the nerve to approach the stage in the front of the room. Timidly, the person takes the microphone and begins to sing. Some members of the audience continue talking to each other in tones just loud enough to make it over the music, but most people have their attention focused on the person on the stage. When the singer seems nervous, the audience cheers as if trying to help push the nerves away. At the end of the song, there are roars of applause. Everyone feels as though they have had a part in the performance.
People continue taking turns up front. Others are more natural at it than others. But even those who struggle, even those who aren’t naturally inclined for the performance, are affirmed and encouraged and loved.

This past week when I was waiting somewhere for my eldest child, a group of parents started talking. After a while, I found myself drawn into the conversation. Once it came to light that my husband and I are pastors, the conversation took a different direction (something that happens quite often). One of the other parents was familiar with our church building, and he listed the weddings and funerals he had been to in the church. He told me what he did and didn’t like about different church buildings, and then he asked, “Does your church have a karaoke screen these days?”
I said that we do have a screen, but we only use it for songs and Scripture readings. Most of our songs are also in the hymnal for those who would prefer to have the sheet music. He told me about a church he had recently attended. The church service was made up of songs he didn’t know, electric guitars, drums, and pop/rock songs re-written with Christian lyrics. And then he said, “If you’re going to do things like that, you might as well have the beer flowing because you’ve got a karaoke bar.”
Another person chimed in that they had been to a church where an Eminem song had been re-written and used during worship. She said,”It draws the kids.” The man who had compared contemporary worship to a karaoke bar responded, “Yes, but what will they think when they look back on their childhood experiences of church and remember moshing to rap songs.”
At that moment it became pretty clear to me that his memories of church services were sensory memories of times standing near family and friends, singing songs everyone knows, and moving and flowing with the traditions of worship. When I told him about the structure of our worship service, he responded with relief, “Now that’s church.”
Though his comparison between contemporary worship services and karaoke bars was more of a commentary on worship style, I started wondering what it would be like if a karaoke bar came to church. I confess that I have never been to a karaoke bar, so I asked several of my friends who were fans of karaoke what the experience was like for them. Nearly every person responded that karaoke was a fun experience where people you knew and people you didn’t know encouraged you to do something that was outside of your comfort zone.
If a karaoke bar came to church, conversations and heated debate about worship styles would be irrelevant. Everyone who does karaoke knows it isn’t really about the music, because – let’s be honest – quite often the music is terrible. It’s not about being the best singer, or even liking the songs. It’s about mutual encouragement. It’s about affirmation and love when you try something that feels a little crazy – even if you end up being terrible at it.
If a karaoke bar came to church, maybe we wouldn’t worry so much about perfection. It’s not about being the best, having the most experience, or knowing enough. It’s not about turning out a perfect performance – as a Sunday School teacher, administrative assistant, choir director, candlelighter. Sometimes we make mistakes. Sometimes we try to do something only to discover we are terrible at it. In those moments, if the karaoke bar came to church, we would find our fellow Christians cheering for us, encouraging us, and maybe even standing up and singing (badly?) with us.
If a karaoke bar came to church, we’d leave each Sunday morning feeling encouraged and lifted up by the community. We’d feel like we spent time catching up with people we maybe haven’t seen for a while. We’d share our joys and struggles. We’d offer hugs, and laugh along with people we care about. We would share our lives with each other, celebrate and grieve, and leave lighter than when we first arrived.
If a karaoke bar came to church, we wouldn’t take ourselves so seriously. Sometimes we have to laugh at ourselves. This thing that we gather for on Sunday mornings (or whenever worship services take place) isn’t an opportunity to prove to ourselves how brilliant and amazing we are. We come together as people who are all trying to do our best, and sometimes that involves making mistakes, making fools of ourselves, and realizing how broken we are. But, we also come together as people who know that we are unable to do things perfectly. All we can do is point in our own imperfect ways to the One whose goodness and love makes it all worth it.
Worship services really aren’t about whether we sing praise songs or hymns. It isn’t about having music so relevant that it is indistinguishable from what’s on the radio. It’s not about having enough star power or that “it” quality. Even as we do our best to practice and improve so that we offer our very best to God, what we end up with still pales in comparison to the praise that is ongoing in heaven.
As Nate Pyle so aptly put it, “Church, as with most spiritual things, has the surface thing we see, and then there is the thing behind the thing.” When we gather together, it’s not really about us. It’s not really about putting on a flawless show. It’s not about having a packed house, the hippest band, the most dynamic preacher. Perhaps if a karaoke bar came to church, we’d remember that.