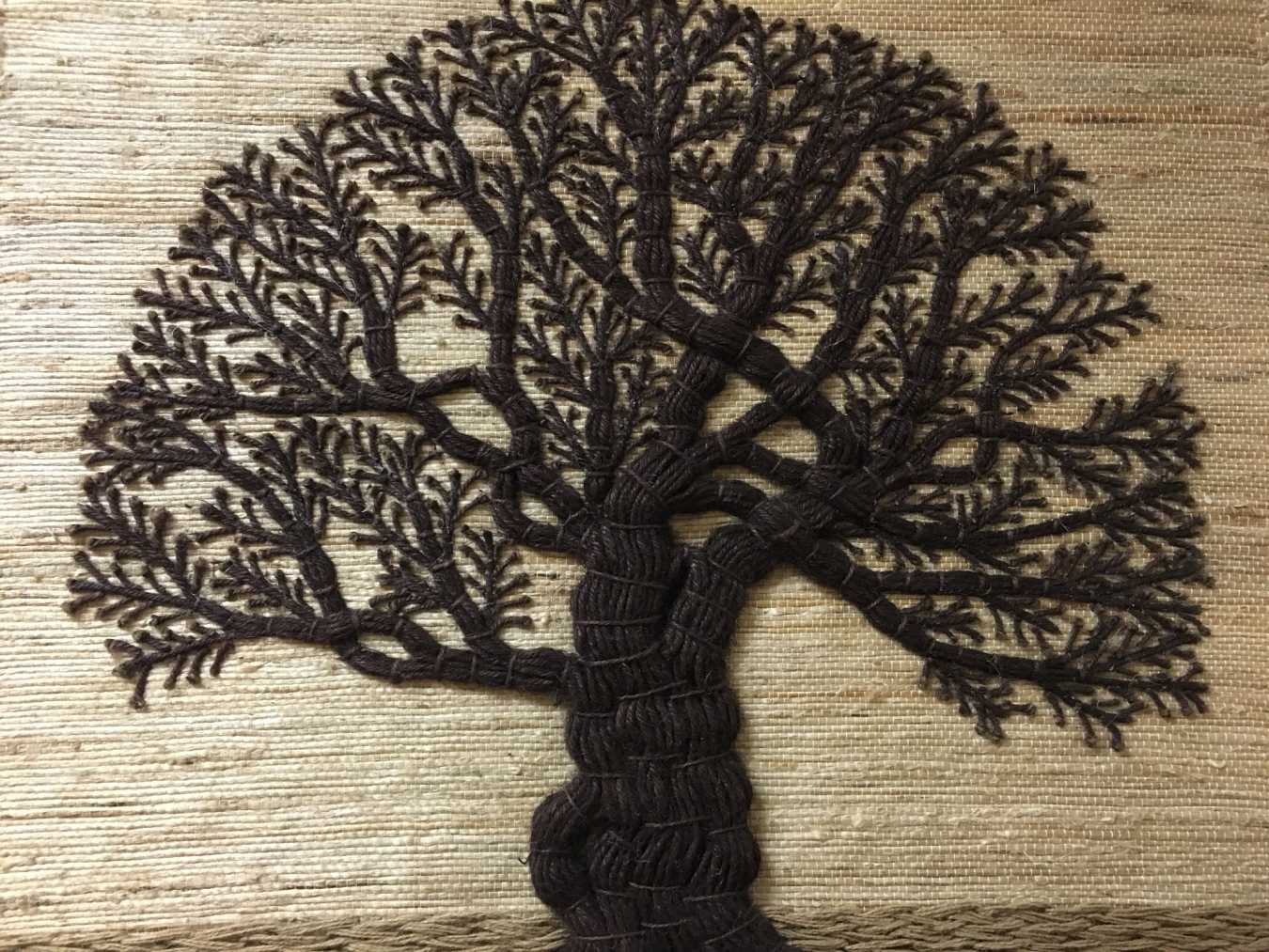 A Tapestry of Unruly Threads

For some strange reason, the story of Ruth and the story of the widow who gave all she had have me thinking about yarn, thread, and weaving. I’m not a weaver, but recently I have learned how to do something called corner-to-corner crochet. In this technique, you make little squares, beginning at one corner of the picture you are creating and expanding square by square until an image appears. I saw a picture of something made this way, and I immediately wanted to try it. Rather than working with one color at a time, a corner-to-corner project requires smaller spools of various colors to be in use at all times. As you work with the yarn, the image begins to appear, but all of those strands and spools can tangle and knot, and I found I was spending about as much time untangling the mess as I was actually crocheting.

The finished image on one square looks like this with the blocky, pixelized image now showing up among the squares.

The front of this square shows the design…but, on this particular square I haven’t yet woven in all the loose ends. The Old Testament and New Testament lessons for this week have me thinking about the unruly strands of thread God weaves together to make something beautiful. The image on this square was made possible because of the weaving and tangling and careful selection of colors in what first seemed like a haphazard process. The loose ends on the back remind me that the front of the picture didn’t come without a struggle.

When I’m finished with my project, all these ends will be worked in and they will disappear from view. But for now, I’m reminded that God works things together through small things that might seem ridiculous, unruly, or even defiant at first. We’re all part of a tapestry of unruly threads, and God is weaving us into the story.

Do you know the story of Ruth, the Moabite widow who refused to leave her mother-in-law Naomi? Perhaps you are familiar with the famous passage from the book of Ruth that is often read at weddings that says, “Where you go, I will go; where you lodge, I will lodge; your people shall be my people, and your God my God” (Ruth 1:16b). But the story is more complex and difficult than this beautiful little verse might let on. Naomi, her husband, and their two sons went to Moab to escape the famine in Bethlehem. While there, Naomi’s sons each married a woman from Moab, and then tragedy strikes the family. Naomi’s husband dies, and ten years later, both of her sons die, too. In a world where women were largely dependent upon either their fathers or their husbands for survival, Naomi and her two daughters-in-law were in trouble.

Naomi urges her daughters-in-law to go back to their homes so that they might have a chance at survival. Orpah does this, but Ruth refuses. Instead, Ruth journeys to Bethlehem with Naomi. This sets in motion an amazing story where Naomi hatches a plan to find a husband for Ruth, and through a series of amazing events, does just that. But, beyond finding Ruth a husband (Boaz, an upstanding man), Ruth has a child named Obed, Naomi becomes the child’s nurse, and the women of the neighborhood surround them as a tightly-woven community. And, if those events were not enough on their own, we read this short, astounding genealogy at the end of the book:

Now, these are the descendants of Perez: Perez became the father of Hezron, Hezron of Ram, Ram of Amminadab, Amminadab of Nahshon, Nahshon of Salmon, Salmon of Boaz, Boaz of Obed, Obed of Jesse, and Jesse of David.

Interestingly enough, in some editions of the Hebrew Bible, the book of Ruth is placed right after the book of Proverbs. Proverbs 31 closes out the book with the question, “A capable wife who can find?” In answer to the question, what follow is the description of a woman who is mighty, strong, a good leader, and who isn’t held back by societal strictures. Proverbs 31 asks, “A capable wife who can find?” And then, in this order of the Hebrew Bible, the reader would be introduced to Ruth.

There’s a reason that Ruth is called a capable woman, or – according to other translations a woman of excellence, a woman of strong character.  We could even call her a woman of valor, an unruly thread in the tapestry of God’s unfolding story. She risks it all, shows love, devotion, and determination that are unrivaled. A widow from outside of the people of Israel flagrantly disregards the cultural regulations for how proper women ought to act in order to show faithfulness, love, and loyalty beyond compare.

This unruly thread in God’s story changed everything.

I find it interesting that this week’s lectionary also includes the story of the widow who put her last two coins into the treasury. Are these two stories about widows included to teach us about giving everything? Perhaps.

Or, is it possible that these two stories show us that seemingly small and insignificant things can change the whole story? Could it be that these two unruly threads – Ruth who showed us that God’s plan would come to fruition through a defiant widow from Moab, and the unnamed widow whose two coins worth only a penny revolutionized her entire religious system – teach us that God’s plan can include unruly threads like each of us?

In Mark 12, Jesus sits down and watches people putting money into the treasury. He has just finished criticizing the scribes for “devouring widows’ houses” and putting on appearances with their long prayers. It is at that moment that Jesus spies a widow putting in two small, copper coins. Mark tells us the coins were worth only a penny. Jesus makes the startling claim that the widow has given more than all the rest because what she gave was everything she had.

This passage has been the text of more stewardship sermons than I can remember, but I wonder if what Jesus was getting at was far deeper than that.

In both Mark’s telling of this story and in Luke’s, the story of the widow who gave all is followed up by people marveling over the grandeur of the temple and the large buildings, and Jesus warning that “not one stone will be left here upon another.” The widow’s gift of the two coins symbolically tore down the system of oppression that demanded that people give enough and do enough to be saved. The widow’s gift pointed out the injustice of claiming to care for orphans and widows, and then asking them to give to the point of death. After this widow’s gift of all she had, Jesus comes out of the temple, and prophesies the end of the temple – not just the buildings themselves, but the injustice and oppression they had come to represent.

The word that Mark uses when he talks of the scribes “devouring widows’ houses” is the same word he uses in the Parable of the Sower. This word for “devour” is the word used to describe how the birds snatched away the seeds the sower had sown along the path. Far more than taxing widows and orphans beyond what they can afford to give, these scribes have taken away the good news that was intended for the people. As the two small, copper coins clanked in the treasury, the widow gave all, and subverted the system that claimed more was needed. Her little was more than their greatest. She offered her very self, just as Jesus was about to do in Jerusalem.

Into the midst of oppression, want, and injustice, a baby, born in a meager stable changed everything. He grew, and rather than following in the footsteps of his culture and entering the family business, he walked away from everything, not even having a place to lay his head. Rather than overthrow the government with might, he gave himself away. He lost everything for himself, and somehow gained everything for us.

Jesus came to show us that self-giving is always greater than self-serving. And it is through unruly threads that do not conform themselves to the pattern of this world that the dividing walls of injustice, oppression, and rejection can be torn down.

When, in the darkness, Jesus cried out in a loud voice, “My God, my God, why have you forsaken me?” I can’t help but think about the voice of God speaking out over the dark, formless void the very words that gave birth to creation. The story that God is weaving is one where everyone – even those who don’t seem to fit – can be woven into the masterpiece. God takes the broken, the misfits, the rejected and turns them into the most beautiful story that has ever been told.

Together, through the unifying power of the Holy Spirit, we are being brought together to weave a tapestry of good news for the world.

For healing of the nations, for peace that will not end.
For love that makes us lovers, God grant us grace to mend.
Weave our varied gifts together: knit our lives as they are spun.
On your loom of life enrol us till the thread of life is run.
O great Weaver of our fabric, bind church and world in one.
Dye our texture with your radiance, light our colours with your sun.

As a collection of unruly threads being worked into God’s masterpiece, may we take comfort in knowing that it is precisely our unruliness that God delights in. May we work together as weavers, working for peace, justice, and love. May we be spurred on by the courage and loyalty of Ruth, by the subversive widow who gave all, and by the Savior who came not to be served, but to serve.

Unruly threads, perhaps, but unruly threads that bring beautiful texture and light to the tapestry of God’s unfolding story of good news for the world.