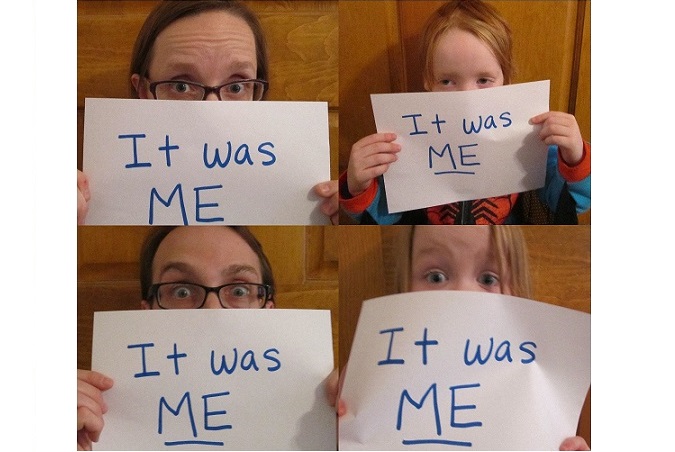 At Least I’m Better Than You

Sometimes I judge people. There, I said it. I don’t mean to. I don’t do it often. I don’t like that I do it, but I’ll admit that I do it sometimes. Sometimes it’s at the grocery store when I’ve run in for an item. I see someone’s child throwing a fit, and I smile and feel thankful that the last time I was at the store, my kid didn’t do that (though they’ve done it many times before). Or maybe it’s when I see a small clip of a reality show (I don’t make a habit of watching reality TV because I think it’s pretty far from reality), and I think, “At least my family isn’t that messed up.” Or sometimes I pick a sin, and try to tell myself that at least I don’t sin in that way. At least I don’t make that particular terrible mistake. At least my sins only hurt me and not other people. At least I’m better than that person over there.
Beneath the judgment is insecurity, a deep and paralyzing fear that if people saw how we really are, they would see what a joke we are. Judging others is an exercise in deflecting attention away from ourselves. And, it’s been this way since the beginning.  When Adam and Eve sinned, God asked Adam how he found out he was naked. Adam blamed Eve for giving him the apple. When God asked Eve about it, she blamed the serpent for tricking her. None of them said, “I knew it was wrong, and did it anyway.” Instead, they judged someone else’s actions. Maybe if God realizes that someone else flubbed up too, my penalty will be less. Maybe the other person will bear the brunt, and I’ll escape unscathed.
And, so we judge. Or, I should say that I judge. I have a hunch that there might be others out there who feel the same way, or maybe have a tendency to point out the flaws of others in an attempt at self-protection, but I should really only speak for myself. The areas where I’m the quickest to judge others are the areas I’m most insecure about in myself. I worry about my messy house, and when I see someone else with a house to rival mine, I breathe a sigh of relief. It’s not just me. Mine’s not so bad after all. It’s not really about judging others as much as it is about trying to validate myself.
Judging others is the ultimate rebellion against authentic living. It is a smoke and mirrors game to take everyone’s attention away from our flaws. Judging others is a distortion of reality designed to slant favor, popularity, forgiveness, and love our direction. It’s selfish and arrogant, but it is born out of fear and self-loathing. The more we judge, the more afraid we are that the truth will get out. We judge because we don’t feel loved.
Jesus taught us to take the log out of our own eye first (Matthew 7:3). He also said that whoever did not have sin could cast the first stone at the woman caught in adultery, which left no one to throw stones (John 8:7). He also told a parable about the Pharisee whose prayer was tantamount to, “God, thanks for not making me like that tax collector” (Luke 18:10-11). And I think he did this, not because other people are without sin, but because he knew we had a tendency to point out the sins of others as a way of making ourselves feel better. Jesus turns the tables and says, “Look at your own sin first.” Tony Campolo said the same thing when he addressed the well-loved phrase, “Love the sinner, but hate the sin.” Campolo said we should never use this phrase. Instead we should say, “Love the sinner, and hate your own sin,” not because other people are without sin, but because judging the sins of others is a way to try and escape judgment for yourself. It’s throwing your brother or sister under the bus.
I wonder what would happen if every time I was tempted to judge someone else, I stopped and thought about my own sins instead. I wonder how that would change the way I treat people around me, and how it would change the way I live my life. I’m not trying to say that “anything goes” or that there isn’t right and wrong in the world. But, judging others turns our neighbors into enemies, and it blinds us to our own need for grace and forgiveness.
To quote Dr. J. Todd Billings, “We’re in a mess, and we need a Savior.” All of us. Not just the people we think mess up more than we do. All of us.
Even me.
Especially me.