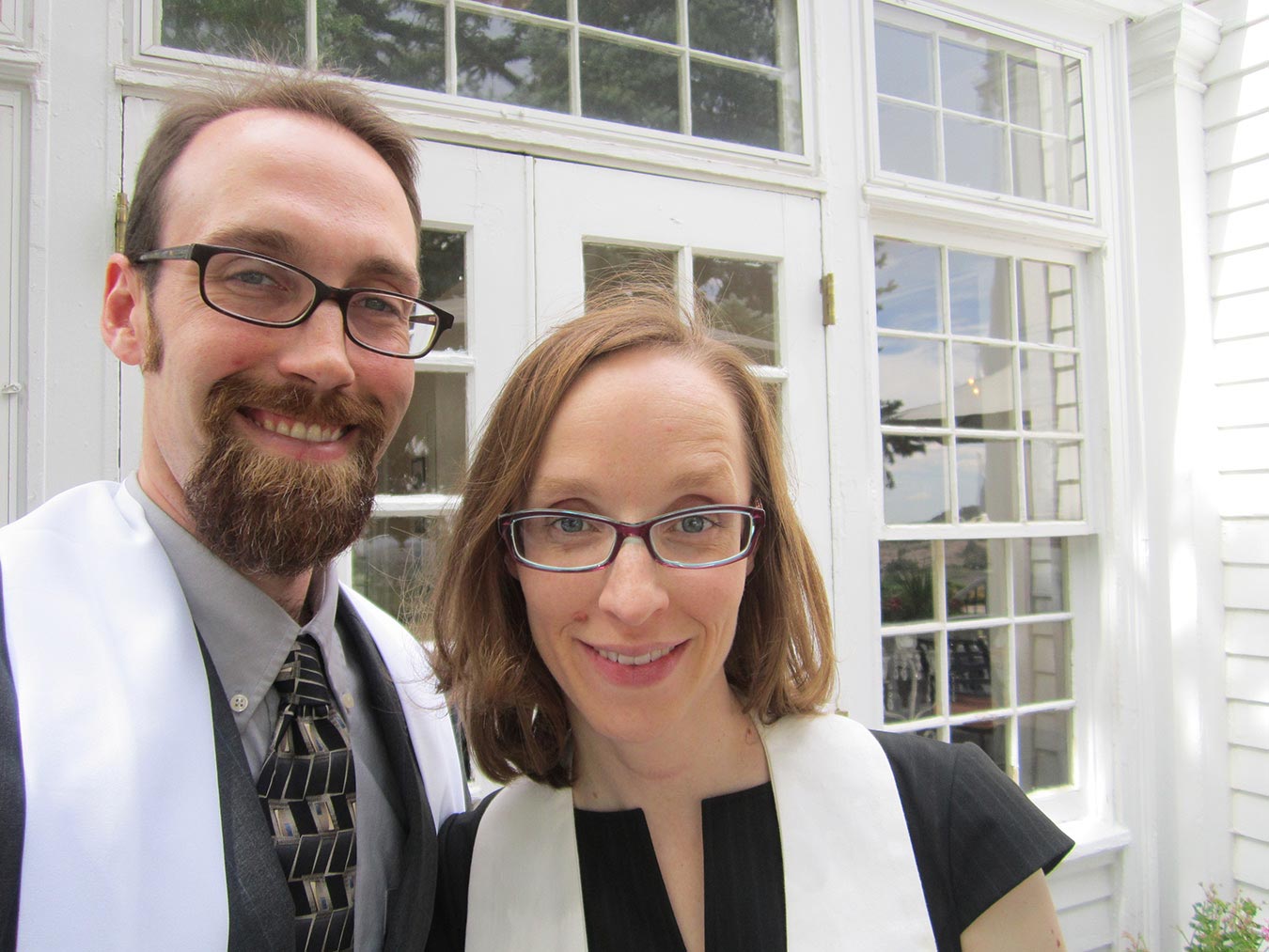 Shortly before my husband and I packed up and moved to Michigan for seminary, we had a conversation with a pastor. He talked to us about the seminary we had chosen, and his concern that the seminary would change us. He told me, “Just because you could become a pastor doesn’t mean you should,” his concern based in a worldview where women could not be ordained.

And then we moved and began our Mdiv. studies. Halfway through seminary, I lost my mother-in-law after a lengthy battle with ALS. We traveled to be with family and to grieve as well as celebrate her life. At the luncheon in the church basement following the funeral service, someone asked me what I was planning to do after seminary. I told them I had no intention of being a trailblazer. Her response was, “Oh, April, you already are.”

When I was interviewed over the phone by the church that would later extend a call to me, I was asked what I would do if the church voted to call me but it was not unanimous because I am female. I responded that my goal was to see Christ glorified and to bring unity to the church. I would not accept a call in a place where there was a lot of opposition because I did not want to be a cause of division in the church.

After graduation, when my husband and I were preparing to be ordained, we received word that our sending church was closing. Our ordination service would be the church’s last service. Very few people were left in the congregation when we were ordained. The service was small, and very few of our dear friends were left. The members of Classis came forward to lay their hands on me and pray. I felt nervous. I was being ordained. I was doing that thing that I had been told I shouldn’t do even if I could. I was going to be the first female minister in my Classis (regional governing body). I was blazing the trail I never wanted to be on.

But, as I was prayed over, something happened. I felt electrified. In a moment it became clear that none of this was about me or what I wanted to do. God had chosen me and was going to be with me on the peaks and through the valleys.

For the first year of ministry as I fumbled and struggled, and tried to balance being a brand-new mom and a brand-new pastor all at once, I continually leaned on that ordination service. It had been small, but mighty, which seems to be God’s way a lot of the time. Something happened that day. God had invested in me authority that was not my own, and the authority I would need as I tried my best to be faithful as I led the church where God was placing me.

Even though I could lean on that moment of ordination, I would be lying if I said I lived into that authority very well. I was scared out of my mind. As a people-pleasing person, it was so difficult for me to tell others I was a pastor knowing that my femaleness would immediately cause them to reject me. It was terrifying to me to watch others label me as soon as they met me. “If she’s a female pastor, what other liberal agenda is she going to foist on us?”

Because of my femaleness, others thought they knew everything about me. Usually they were quite wrong, and it made my calling feel like a tremendous burden to carry, for all the wrong reasons.

Over the past 6 1/2 years of pastoral ministry, I have noticed a change in myself as I have learned to live into the authority God has invested in me. This change has been gradual, but has accelerated in the last couple of years. As I have reflected on this growth into pastoral authority, I felt compelled to share a list of things I think have helped me transition from timid people-pleaser to ministering as God has called me.

1. Opposition didn’t crush me (2 Corinthians 4:7-12). The people-pleaser believes the lie that when someone doesn’t like you, everything will fall apart. As backwards as it sounds, facing the opposition from others proved to me time and again that when someone doesn’t like me or disagrees with me, the world goes on. My authority doesn’t rest on how many people support me; it rests on the God who called me.

2. Processing conflict and self-doubt with a trained coach. For about three years, I had the amazing blessing of talking on the phone with a trained coach (who also happens to be a gifted pastor) to process whatever was going on in ministry. She knew how to ask the right questions, push the right buttons, and offer the right amount of encouragement and self-reflection to help me see what was behind any doubts or struggles I was experiencing. I highly recommend the coaching process to any who are looking to become more self-aware and able to handle difficult situations. The Reformed Church in America (RCA) has a coaching network for any RCA pastors. Many other denominations are beginning to offer this resource as well.

3. Well-timed affirmation. In the midst of conflict, difficulty, self-doubt, and struggles, God has been there with affirmations when I needed them. From having an unexpected person say that a sermon challenged them when they needed it most, to having other pastors push me to use my gifts more broadly for the Kingdom of God, the perfectly-timed affirmation of God has gotten me through difficult times.

4. Time and experience. The first time I stood behind the Communion table, I was terrified. I had never done it before. I had memorized the Communion Prayer. I had practiced with my preaching class cohort. But, nothing is the same as taking the bread, breaking it, and sharing it with the congregation. The second time, I had the experience of the first under my belt. Time, practice, experience, trial and error have all been a necessary part of the learning curve as I grow into pastoral authority. And, I have a few gray hairs to show for it. I wear them proudly (Proverbs 16:31 – ha!)

5. Facing my own demons. When someone belittles me, why does it begin a slew of self-deprecating comments in my mind? Why do I care if other people oppose me? If I’m serving God because God called me, why does it matter if anyone is against me? The painful reality for a people-pleaser is that somewhere along the line, we believed the harmful things we heard from others. Living into authority means facing those demons, those “tapes” we play over and over in our minds that say, “You can’t do it.” This may involve digging deeply into past painful experiences and constructing a new meaning from them. It can be painful, but it is an important step of the process.

6. Seeing change in others. Someone who once opposed me vigorously recently said that he believes God calls some women to ministry. Five years ago, his comment would have been impossible. When Jesus told his disciples about how difficult it would be for the rich to enter the Kingdom, the disciples were distraught and asked, “Then who can be saved?” Jesus answered, “For mortals it is impossible, but for God all things are possible” (Matthew 19:25-26). I quickly realized that it was not my job to get people to understand that God had called me. It was not something I had to prove. God is the one who works to bring change through the power of the Holy Spirit. It was not my battle to fight. And, as I’ve seen God changing hearts and leading people who had once opposed me to champion the full inclusion of women in church leadership, I have realized that truly nothing is impossible for God.

7.  Strength and authority doesn’t always look the same. In seminary, I was asked to lead a small group class period.  The class period flopped. It was brutal. I asked a question, and no one answered. We sat there and stared at each other despite my attempts to get a conversation going. After class, my professor told me that I had a feminine leadership style, and she meant that as a compliment. I’m a collaborator, but for years churches have taught that the only acceptable leadership style is authoritarian. Collaborative leadership styles require trust. Once trust has been established, collaboration is possible. It has taken time to establish trust with the leaders in my church and in my Classis, but as it has happened, I have come to see my collaborative style not as a weakness, but as a unique style that works quite well when there is trust in the system.

Growing into pastoral authority is a process, and the learning curve is enormous. It’s like learning to be a parent. Even though my body was built to carry a child, I wasn’t wired to be a parent. I had to learn. Each time I’ve learned something, it has made the next time a little easier. And, I hope that as I lead with authority, I will be demonstrating God’s power to work through any number of leadership styles, and through any number of people.

Shortly after moving into seminary housing – so young.