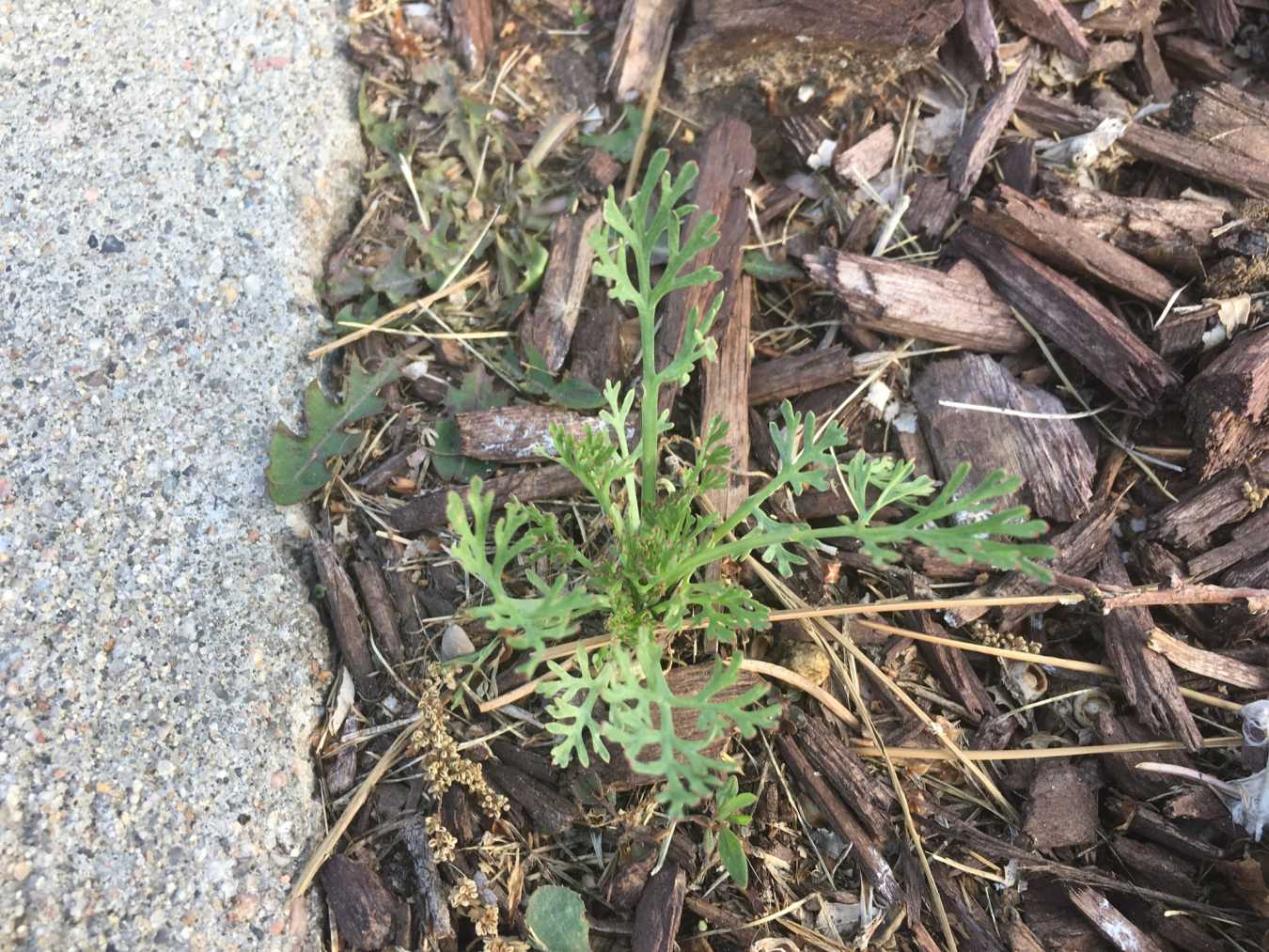 Why Did the Poppy Cross the Road?

Last summer, I noticed that there was an area in my front yard where the grass wasn’t growing. It was almost a perfect rectangle where the grass was dying. It also just so happened that the soon-to-be dead grass was right around my mailbox, so I started digging up grass to make a nice mulched area around the mailbox.
Much to my surprise, the reason the grass was dying in a perfect, rectangular shape was because there was a perfect rectangle of bricks below the grass. After digging up bricks – some in various stages of decomposition, I lightly mulched, and I planted a couple of impatiens. The impatiens were short enough, and non-perfume-y enough that I didn’t think they’d cause much trouble for our mail delivery person, and they added a pop of pink and white to the place previously occupied by a dead, rectangular piece of grass.
A week or so ago, I went out to that patch of mulch and started pulling weeds. I also noticed two plants that really didn’t look like weeds. I had no idea where they had come from, but I decided to leave them until I figured out what they were. I took a picture of them with my phone and uploaded them to an app I love to use (Garden Answer Plant Identification – for Apple; Garden Answer Plant Identification – for Android).
The app suggested ragweed, which is does look a bit like, but I still thought it was something different. This particular app is most accurate when you have a flower or bud in the picture, and then it works amazingly well. I left the mystery plant, and forgot about it until this afternoon.
On a walk, I stopped by a neighbor’s house and noticed they had the same kind of interesting leaves in their flower bed. They not only had leaves, but they also had blossoms. I snapped a picture of a brilliant orange flower with my phone, uploaded it to the app, and the app responded that I had a California poppy on my hands.

Intrigued, I consulted Google, which informed me that California poppies are noxious and invasive plants that will travel and plant themselves in your neighbor’s yard, in the next neighborhood over, etc., until they have planted themselves all over the community.
I wondered if that was why Dorothy happened upon such a huge field of poppies in the Wizard of Oz. One poppy planted several poppies, which planted more poppies, which planted a field.
I think that’s a pretty solid metaphor for the way we live our lives, too.
The things we do and say are like seeds that have a way of planting themselves in places we didn’t necessarily intend. Those seeds can invade, take over, and change the landscape – for good or for otherwise. We may not ever see what our words do, even though the effects of them have long-reaching consequences. We may not ever know how important or detrimental our actions were in someone’s life until long later – if ever at all.
These accidental California poppies by my mailbox remind me that what might seem like the littlest of things to me, might be monumental to someone else. Every day, I hope I sow a whole lot more kindness, love, generosity, and hope than I do all the negative things that will also invade.
I think kindness and love can be like invasive plants, but in the best of ways.
So, why did the poppy cross the road?
Because it was a noxious weed. And that’s what noxious weeds do.
(Sow some kindness and love today. I have a feeling it will invade your neighborhood.)